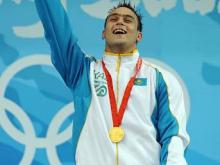 I'm very happy to come back to London and get the chance to improve my English.

Double Olympic champion Ilya Ilin will return to London to study English after falling in love with the city during last summer’s Games.

The Kazakhstani weightlifter, who broke two world records on the way to retaining his Olympic gold medal in the men's 94kg, will learn English with Kaplan International Colleges at their language school in Covent Garden.

After smashing his sporting targets last year, Ilya revealed his next personal goal was to learn to speak English. He will aim to do this in the city where he achieved his greatest professional success while becoming the only Olympic weightlifter to retain their title from Beijing.

The Kazakhstani national hero is so enthusiastic about starting his English learning journey that he will take a 10-week long general English course, which is a semi-intensive program that focuses on the four main aspects of language: reading, writing, listening and speaking.

"When you travel so much in the world, English is something you must know. It can open new doors for friendships and professional connections. I'm very happy to come back to London and get the chance to improve my English,” said Ilya.

Ilya was recently hailed by the Olympic Council of Asia as one of the best Asian athletes in the world thanks to his record-breaking exploits at the London Games.