Alstom enters Canadian wind market through an agreement with NaturEner 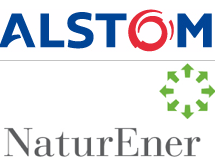 Alstom and NaturEner Energy Canada Inc. (“NaturEner”) have entered into an agreement for the supply of up to 414 MW of wind turbines to be installed at NaturEner’s Wild Rose Projects in Alberta. The agreement includes 138 ECO 110 3.0 MW wind turbines, and 10 years of maintenance services. This project, amounting to around €420 million, should be booked by Alstom in the fiscal year 2013/14 as soon as Alstom receives the Notice To Proceed (NTP), which is primarily subject to the financial close of the project and its successful permitting.

This landmark agreement marks Alstom’s successful entry into the Canadian wind market. Each high-yield Alstom ECO 110 wind turbine is classified II-A and IS Class with a rotor diameter of 110 meters, ideally suited to maximizing power output from intermediate wind speeds averaging 8.5 m/s. Alstom will assemble the turbine nacelles in its factories located in Amarillo, Texas, and in Buñuel, Spain, and will source other components globally.

“Alstom Wind is proud to work with NaturEner and the province of Alberta on this landmark project,” said Andy Geissbuehler, head of Alstom’s North American Wind business. “The combination of Alstom’s proven technology and NaturEner’s extensive experience in developing renewable energy projects will enable us to provide an efficient and reliable technology solution that takes full advantage of the strong wind profile of these sites. The project also demonstrates Alstom’s ability to support utilities and independent developers with proven wind power technologies that can support utility scale projects in North America.”

“NaturEner is truly excited to be working with Alstom to bring the Wild Rose projects into commercial operation,” said Jose M. Sanchez-Seara, CEO of NaturEner North America. “While much work remains to be done, we are strongly committed to working with Alstom to achieve our mutual goals. After having successfully built 399 MW in the United States, the Wild Rose projects will add up to 414 MW to NaturEner’s operating assets, solidifying NaturEner as a robust renewable energy platform in North America.”

The Wild Rose 1 and Wild Rose 2 wind farms will be located on private agricultural land in Cypress County, southeast of the city of Medicine Hat in the province of Alberta. Scheduled to enter commercial operations at the end of 2014 and end of 2015, Wild Rose 1 and 2 will be the largest wind farm in Canada on a combined basis, with a total installed generation capacity of approximately 414 MW. In anticipation of this significant milestone, NaturEner is in active negotiations on long-term energy and environmental attribute sales from the projects. This robust portfolio of contracts will facilitate financing of the projects. NaturEner is also in advanced negotiations on financing structures and looks forward to a full project release and start of construction on Wild Rose 1 during the second half of 2013 and on Wild Rose 2 one year later.

Alstom is a global leader in the world of power generation, power transmission and rail infrastructure and sets the benchmark for innovative and environmentally friendly technologies. Alstom builds the fastest train and the highest capacity automated metro in the world, provides turnkey integrated power plant solutions and associated services for a wide variety of energy sources, including hydro, nuclear, gas, coal and wind, and it offers a wide range of solutions for power transmission, with a focus on smart grids. The Group employs 92,000 people in around 100 countries. It had sales of €20 billion and booked close to €22 billion in orders in 2011/12.

NaturEner Energy Canada Inc. and its affiliate NaturEner USA, LLC are wholly-owned subsidiaries of Spain-based Grupo NaturEner, S.A. Together, they have developed renewable energy facilities in three different countries comprising mini-hydro, solar photovoltaic and utility-scale wind. NaturEner owns and operates the combined 210 MW Glacier Wind 1 & 2 projects, located near Ethridge, Montana and the 189 MW Rim Rock Wind project, located near Kevin, Montana. NaturEner manages and integrates the production from its Glacier and Rim Rock projects through its wind-only Balancing Authorities, operated from NaturEner’s Operations Center (NOC), a fully enabled, state-of-the-art, 24/7 facility. The NOC was developed for the purpose of supporting both commercial and operational functions for NaturEner’s operating projects and transmission assets, including all the northbound capacity on the MATL intertie which opens a new pathway between the Mid-C and AESO markets.