“Solar Discount Secrets”, a New Report on How to Purchase Solar Power Systems Inexpensively, Made Available Today from the Publishers of Power4Patriots

A new 32-page report titled “Solar Discount Secrets” showing people how to buy pre-made solar panels and systems at a discount is now available at no cost to the general public, the company announced today. 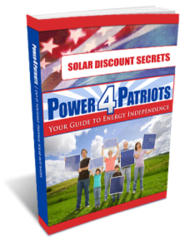 Regardless of whether someone builds or buys a system, they’ve made the right decision to become independent of high power bills and outages by producing their own electrical power through solar and wind energy.

Powering a home, cabin or RV with solar and wind energy is a great way to save money and become independent of the vulnerable U.S. electrical grid, according to Power4Patriots of Nashville, Tenn. The company’s flagship product of manuals and videos describes in great detail how to build solar panels, wind turbines, water heaters and solar heaters to accomplish just that task.

But not everyone is physically able or has the time to build their own alternative energy products. Power4Patriots wants to help those people acquire pre-made solar panels and systems for considerably less money than they would spend if they purchased them from more traditional suppliers.

The company announced today that it is offering a 32-page report titled “Solar Discount Secrets”, which can be downloaded at no cost by the general public from the Power4Patriots blog. The report is filled with details regarding finding a reputable solar contractor, negotiating the best deal for a system and avoiding unscrupulous dealers. Included in the report are resources to help consumers find components online and take advantage of local rebates and tax incentives for renewable energy.

Regardless of whether someone builds or buys a system, they’ve made the right decision to become more self-reliant and independent of high power bills and outages by producing their own electrical power through solar and wind energy, according to Power4Patriots.

The company, which says that installing solar panels and a wind turbine at one’s home can cut energy costs by as much as 75 percent, also reminds homeowners that the outside temperature doesn’t matter when it comes to benefitting from solar panels, which are energized by sunlight. Urban conditions work too because roofs, poles, fences and windowsills can be utilized.

Check out this Power4Patriots video that answers the question of whether an off-grid power system will typically increase or decrease a property’s value.