ClaimsComp is building awareness about the BP Deepwater Horizon settlement, which was finalized on December 21, 2012, in a Louisiana federal court. Many businesses, nonprofits, and individuals are unaware they have a valid claim. 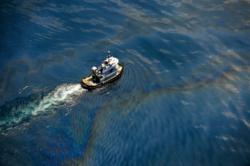 “People have no idea they have a valid claim,” said John Pawlak, CEO of Alpharetta, GA.-based ClaimsComp, Inc., a claims recovery service company. “And there are billions of dollars just waiting to be claimed.”

The money is flowing in for businesses and nonprofit organizations adversely affected by the 2010 BP Deepwater Horizon oil spill in the Gulf of Mexico. The financial payments are the result of a class action lawsuit brought against British Petroleum (BP) that was recently settled in a Louisiana court.

“People have no idea they have a valid claim,” said John Pawlak, CEO of Alpharetta, GA.-based ClaimsComp, a claims recovery service company. “And there are billions of dollars just waiting to be claimed.”

"Moreover," added Pawlak, "you are not required to show economic damage directly caused by the oil spill. In such cases, causation is presumed based on the location. You only need to have been located in an economic loss zone."

One place of worship that recently cashed in on a BP claim is MorningStar Church in Tampa, FL. Pastor Tony Byrd said he was pleasantly surprised with the claims process. “We were convinced we had absolutely no shot at a BP Deepwater Horizon claim, and that it wasn’t even worth taking a look,” said Byrd. “ClaimsComp really opened our eyes, however, and the process has been so seamless. Like us, you may be in for a nice surprise!”

The BP Deepwater Horizon settlement coverage area encompasses all of Louisiana, Mississippi, and Alabama, and the coastal counties of Texas and Florida. Individuals, businesses, and nonprofit organizations are eligible if they lived, worked, and/or operated in the affected area during the time of the BP oil spill. Click here for a complete list of eligible counties and parishes.

About ClaimsComp
ClaimsComp specializes in the recovery of funds from settled class action lawsuits for businesses and nonprofit organizations. Our experienced team has helped more than 180,000 people over the past 15 years, and have recovered more than $240 million in class action claims. For any Deepwater Horizon claim, ClaimsComp will complete and submit all relevant claim forms, run financial tests, assess direct and indirect consequences, and choose a benchmark period to maximize the claim. There’s no risk or cost involved to see if you qualify for a claim. To see if your business or organization is eligible, contact one of our qualified claims managers for a free evaluation. Call us toll free at 888-404-1395 or visit http://www.claimscomp.com.