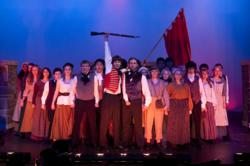 CCTA's 2009 Production of Les Miserables by its Teen Professional Theatre

CCTA's Teen Professional Theatre is a recipient of five grants from the National Endowment for the Arts.

"SHREK!" is an area premier for CCTA’s Teen Professional Theatre, an audition-based program for advanced musical theater students. Since 2002, young actors of all backgrounds have spent four weeks each summer developing their individual theatrical skills through one-on-one and ensemble rehearsals and intensive workshops. Each session culminates in five public performances of the selected musical production and boasts alumni who have appeared on Broadway and in national tours. The program, created by CCTA Artistic Director Toby Orenstein, is a recipient of five grants from the National Endowment for the Arts. Auditions will be held March 20 in Fulton, MD and April 12 in Ellicott City, MD. CCTA's Teen Professional Theatre will be held June 24 - July 21 with performances July 18-21 at Reservoir High School in Fulton, MD.

The organization's Jr. Professional Theatre was created in 2012 as an intensive, audition-based program for middle school-aged students with a strong interest in musical theater. Students selected to participate spend three weeks in one-on-one and ensemble rehearsals. The program culminates in two public performances of the selected musical production. Auditions will be held April 15 and 17 in Ellicott City, MD. The program will run July 22 - August 9 with performances on August 7 and 8.

CCTA is a well-respected arts nonprofit with over 40 years of experience and service to the youth of the Baltimore-Washington area. It was founded in 1972 by Toby Orenstein with a mission to educate through the arts by creating theatrical experiences that inspire thought, action, creativity and change. CCTA serves approximately 30,000 individuals annually with a CONSERVATORY program of classes, camps and workshops; THEATRICAL PRODUCTIONS for schools; and an OUTREACH PROGRAM that makes theatrical experiences accessible to students who are often excluded from mainstream arts programming.

To schedule an audition for either program, contact CCTA at 410-381-0700 or Carmen(at)CCTArts(dot)com.