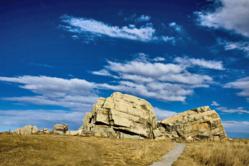 If the recently reported findings of bones of giant camels found on Ellesmere Island in the arctic are the ‘ambassadors of climate change’ then the Big Rock in southern Alberta is the ‘ambassador of global cooling’ say Friends of Science, the climate science critical review group.

Friends of Science will be expanding the debate on climate change by providing a broader spectrum of science-based information and insight through an upcoming series of press releases. The "Big Rock" is the visual theme for 'rock solid' science-based evidence.

The "Big Rock" at 15,000 tonnes is the largest known ‘glacial erratic’ in the world, located in a field outside the town of Okotoks, Alberta, Canada.

“A glacier transported the rock to its present location over 10,000 years ago from some 400 km to the north,” says Norm Kalmanovitch, a geophysicist and long-time member of Friends of Science. “Since then the Earth warmed to the Holocene optimum about 5000 years ago and has been cooling since as we head towards our next ice age possibly within the next 5000 years.”

Today “Big Rock” is a sacred landmark to the Blackfoot nation and also the namesake of a popular local brand of Alberta beers and ales.

“Earth scientists generally look askance at catastrophic claims about global warming,” says Kalmanovitch. “We are currently in a warm period, geologically speaking. There have been four of these in the past, but each cooler than the previous one. The present warm period is cooler than the Medieval Warm Period. That’s what we should be concerned about.”

Friends of Science recently issued a press release on the dangers of global cooling which would follow a solar hibernation. Based on current solar activity, cooling is a likely consequence.

Kalmanovitch points out that all four previous warm periods are detectable in the Greenland Ice Sheet cores.

“But the ice sheet never melted – even during these warmer periods nor did it warm during the peak temperatures of the Holocene optimum,” says Kalmanovitch, “so regardless how warm it got in the arctic when the camels were roaming Ellesmere Island, it wasn't warm enough to melt ice sheets after glaciations.”

That may come as a surprise to proponents of global warming who have for years been predicting catastrophic arctic ice melt and a rise in temperature due to a rise in carbon dioxide levels.

In recent reports about the discovery of a giant camel skeleton in the high Arctic, mention was made that the sun affected climate change.

“The magnetic flux of the sun affects climate systems on earth. After careful review of hundreds of peer-reviewed papers, academic articles and our own years of field experience and training, our conclusion is that the sun is the main driver of climate change,” says Ken Gregory. “Not CO2.”

Dr. Neil Hutton, director and former president of the Canadian Society of Petroleum Geologists adds: “In addition to a large volume of scientific work on effects of solar wind, cyclical solar magnetic field reversals, and other cosmic influences, the European Nuclear Research Institute (CERN) CLOUD experiment provides experimental corroboration of Henrik Svensmark’s work to show that Earth’s Climate is the interplay of cosmic rays and the Sun.”

Friends of Science note that if the climate catastrophe activists are allowed to continue with their present campaign to shut down all things producing carbon dioxide, even beer could be the next victim, as will hockey rinks and hockey teams.

“We are on a “Big Rock” mission to ensure climate science education of the public,” says Len Maier. “Climate policies should be based on “rock solid” scientific evidence, not computer models or fear mongering. We will be extending our media reach to educate politicians and the public about our climate science insights.”