The timeless design honors the game, our nation, as well as the eight member schools and their rich hockey histories. The one-year countdown begins to inaugural championship! 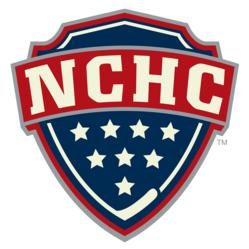 “We’re excited about our new logo... It captures the spirit and traditions of our teams and their programs, as well as the significant place that college ice hockey holds in American sport.

The National Collegiate Hockey Conference, barely eight months from starting its inaugural season, is taking significant strides toward connecting with fans from its member institutions located in the heart of the Midwest, across the prairie and into the shadows of the Rocky Mountains.

As the State of Hockey gets set to crown Minnesota’s champions in boys’ high school hockey, representatives of the NCHC and member schools are in Minneapolis today to release the dates and ticket prices for its inaugural post-season tournament, provide details about the NCHC’s new information-rich and easy-to-engage website and to unveil the Conference’s newly designed logo,

“We’re excited about our new logo, which was designed with the input of all of our member institutions,” said NCHC Commissioner Jim Scherr. “It captures the spirit and traditions of our teams and their programs, as well as the significant place that college ice hockey holds in American sport.”

The logo will be the Conference’s visual stamp on television, websites and in print media for years to come. Trimmed in red, the logo sports a blue field, a white hockey stick and bold block letters spelling out NCHC across the shield’s breast.

Adrenalin Inc., a sports marketing firm whose logo designs include those of the NHL’s Kings and Coyotes, took input from every NCHC member before crafting the league’s signature symbol. “We explored a variety of options that led to the final mark,” said Adrenalin’s president, Daniel S. Price. “The confidence expressed in the shield, stars and American colors position the NCHC as an important part of college hockey's new chapter.”

Meanwhile, in neighboring St. Paul, the NCHC will have a booth at the Let’s Play Hockey Expo in downtown St. Paul, just steps away from where Minnesota’s best high school players are passing, shooting and scoring their way to the goal of becoming state champions. Conference staff will be on hand to introduce the NCHC logo to thousands of fans and explain the goals and vision for arguably the strongest collection of college hockey teams in the nation.

While allies in their off-the-ice mission to give fans the best college hockey can offer, the eight schools will be focused on the weekend of March 21-22, 2014 at Target Center in bustling downtown Minneapolis for the right to lay claim to the first Conference championship of the NCHC and to secure a guaranteed berth in the NCAA Division I Hockey Tournament. Ticket packages for the 2014 NCHC Championship tournament can be reserved now at AXS.com. Packages are $130 (lower level and first 8 rows of the upper level) and $60 (rows 9 and up in the upper level) – these prices include a ticket for each of the 4 games of the tournament - 2 semi-final games, third place game and Championship game.

For those who wish to follow the exciting action away from the Twin Cities’ most dynamic entertainment district, the NCHC is partnering with a veteran in sports web design Minneapolis based, TST Media – http://www.nchchockey.com, to bring to fans anywhere on the globe every possible digital detail – game by game, player by player and much more.

“We are thrilled to have such an exciting and prestigious event coming to our arena and our city,” said Target Center Vice President/General Manager Steve Mattson. “The landscape of college hockey is changing and Target Center is proud to be part of the history that will be made!”

NCHC LOGO UNVEILING AT A GLANCE

About Target Center:
Located in the heart of downtown Minneapolis’ vibrant Warehouse District and adjacent to Target Field, Target Center opened its doors in 1990 and is best known as the home of the NBA’s Minnesota Timberwolves and the WNBA’s Minnesota Lynx. The arena, owned by the City of Minneapolis and operated by AEG, attracts more than 1 million visitors a year thanks to its professional basketball teams, sporting events such as college and high school hockey and high school basketball and entertainment events including major concerts, family shows and other attractions. For NCHC tournament ticket information, go to http://www.targetcenter.com or http://www.axs.com.