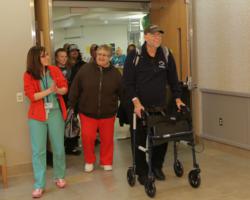 Feb. 4, 2013: SynCardia Total Artificial Heart recipient Bob Phillips, 74, leaves Penn State Hershey Medical Center with his wife Norma to wait for a matching donor heart at home. He is the oldest patient in the U.S. to be discharged from the hospital using the Freedom® portable driver to power his Total Artificial Heart. Photo by Darrell Peterson, Penn State Milton S. Hershey Medical Center

For 73 years, Bob Phillips was nothing but healthy. So healthy in fact, that he hadn’t seen a doctor for 25 years. He never suspected that at age 74, he would become the oldest patient in the U.S. and the first in Pennsylvania to leave the hospital without a human heart.

“I feel normal. That may be hard to believe, but I do,” said Phillips, a champion skeet shooter who enjoys working on antique cars. “They put it in and I really didn’t know an artificial heart was in there.”

Phillips was admitted to Penn State Hershey Medical Center last August after he suffered a massive heart attack while returning from a trapshoot. Doctors placed two stents to open up nearly complete blockages in arteries to his heart, but he remained in cardiogenic shock.

Phillips was placed on extracorporeal membrane oxygenation (ECMO), which takes over the function of the heart to give it time to rest while ensuring proper blood flow to other organs, like the kidneys, liver and brain. However, a subsequent ultrasound revealed a large hole between the left and right sides of his heart, as well as a rupture. The extensive damage to his heart couldn’t be repaired.

“It was the SynCardia temporary Total Artificial Heart or nothing in his case,” said Dr. Edward Stephenson, cardiothoracic surgeon at Penn State Hershey. “On the spectrum of severity, his heart attack was the highest. Yet on the inside, you wouldn’t know he was 70-something because his other organs were so healthy.”

During a five-hour procedure on Sept. 7, 2012, the Penn State Hershey medical team, led by Drs. Walter Pae and Stephenson, removed Phillips’ irreparably damaged heart and replaced it with the SynCardia Total Artificial Heart. The following month, Phillips celebrated his 74th birthday with the medical staff that saved his life.

In December, Phillips was switched to the Freedom® portable driver, the world’s first wearable power supply for the SynCardia Total Artificial Heart. The Freedom driver allows stable patients who meet discharge criteria to leave the hospital and wait for a matching donor heart at home.

“It’s our goal with this technology to bring the patient back to normal and going home is the first step back to life, back to normal,” said Dr. Aly El Banayosy, medical director of the mechanical circulatory support program at Penn State Hershey. “It’s a major step in improving his psychological wellbeing and recovery and helping him cope with the long waiting time for a donor heart.”

On Feb. 4, Phillips and his wife Norma bid the Penn State physicians and staff goodbye as they were escorted from his hospital room to a car waiting to take them home.

“It’s been five months since I saw the house, and you know, you miss the atmosphere, the place, the people, everything about it,” said Phillips. “So when they said you might as well go home and wait there, I liked that idea.”

The Freedom driver is CE approved for use in Europe and undergoing an FDA-approved Investigational Device Exemption (IDE) clinical study in the U.S.

SynCardia Systems, Inc. (Tucson, AZ) is the privately-held manufacturer of the world's first and only FDA, Health Canada and CE approved Total Artificial Heart. Originally used as a permanent replacement heart, the SynCardia Total Artificial Heart is currently approved as a bridge to transplant for people suffering from end-stage heart failure affecting both sides of the heart (biventricular failure). There have been more than 1,100 implants of the Total Artificial Heart, accounting for more than 300 patient years of life.

In its February 2013 issue, Forbes selected SynCardia as one of "America's Most Promising Companies" for the second consecutive year. On the list of 100 privately held, high-growth companies with bright futures, SynCardia was selected #69, moving up eight spots from its #77 ranking last year.