Over $870 Billion of Commercial Real Estate Traded in 2012 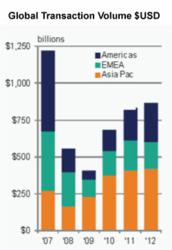 We have seen the highest quarterly investment levels since 2007.

Real Capital Analytics’ (RCA) recently released 2012 Global Capital Trends® Year In Review highlighted robustness in global transaction volumes during 2012. While, in Europe and the Americas, the fourth quarter is typically stronger as investors look to complete transactions by year end, Q4 2012 was unusually strong leading to over $870 billion being recorded for the full year.

“Q1 2012 started off weak with various global economic concerns playing on investor minds, but by year end we have seen the highest quarterly investment levels since 2007,” said Simon Mallinson, Executive Managing Director, EMEA. “The pending deal pipeline for early 2013 is also looking positive for the year ahead."

In America, most of the gains were driven by extremely strong US volumes, with Q4 growing 49% year-over-year in the quarter. In Asia Pacific, strong Chinese land sales boosted volumes although the end year volumes saw the same jump as other regions.

Capital flows from the Middle East and Asia gathered further momentum in Europe, with these investors up 43% and 52% respectively. North American investors accounted for two thirds of all global investment into Europe, with a decline in Canadian activity balanced by increasing US investment.

“Despite pricing levels in Paris and London returning close to their peak levels, these markets are still in favor with investors looking to secure long-term income in liquid markets” commented Joseph Kelly, Director of Analysis. “Retail investment fell out of favor in 2012, down 12% on 2011 levels, while the apartment sector was a bright spot, up 57% YOY.”

About Real Capital Analytics, Inc.
Real Capital Analytics, Inc., based in New York City, is the industry’s leading global provider of commercial property data. The firm's proprietary research is focused exclusively on the investment market for commercial real estate. Within that arena, Real Capital Analytics offers the most in-depth, comprehensive and current information of property investment activity. In addition to collecting transactional information for property sales and financings, RCA interprets data such as yields, pricing and sales volume, and quantifies the market forces that affect the liquidity of commercial real estate around the world. The firm publishes a series of Capital Trend reports and offers an online service that provides current transactional information for all markets globally. For more information on the RCA, visit http://www.rcanalytics.com.