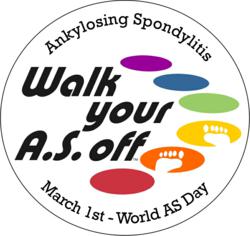 We make an impact together.

The Arthritis National Research Foundation (ANRF) is partnering with Walk Your AS Off in an effort to raise $75,000 for Ankylosing Spondylitis (AS) research. The annual walk spans two months of active participation. It just began on March 1st and it will continue until World AS Day on May 4th. Every participant’s collective steps are tracked, creating a global effort to benefit a great cause and take small steps together to make a difference. This year, walkers are participating from Europe, the Middle East, Asia, the South Pacific, and Africa.

AS, the focus of the walk, is a chronic, lifelong autoimmune disease in the arthritis family that causes severe back pain and inflammation in spinal joints and has even led to spinal fusion and permanent disability. Studies have shown that these diseases may also affect major organs in the body and other joints as well, both of which can cause serious side effects. Many cases go undiagnosed and it affects approximately 33 million people worldwide.

This year, Walk Your AS Off is shooting for the moon – literally. Last year they were successful in gaining enough steps to circle the globe, so this year the goal is to collect enough footsteps to create an imaginary pathway to the moon. To accomplish this it will take 478 million steps. Along the way, participants will try to raise $75,000 for an AS research grant.

“This year we have doubled the number of teams we had last year and quadrupled the number of people,” said Jenna Visscher, Walk Your AS Off creator and team captain. “We don’t want to just talk the talk about spreading awareness about AS. In order to take great strides to make a difference, we need to walk the walk. We make an impact together.”

Walkers chart their footsteps on pedometers and after collecting their total number of steps for each week, at the end of the week they report to their team captain, who sends in their team’s total number of steps. Team members can set their own goals and collect pledges to meet them. Each person’s effort contributes to the overall goal of funding an AS research grant. Walkers can designate which charity their pledges will support; the Arthritis National Research Foundation is one of the charities walkers can choose. Donations to the Arthritis National Research Foundation help to fund scientists and researchers searching for cures and treatments for many forms of arthritis.

With the Arthritis National Research Foundation and Walk Your AS Off working together, awareness about AS and autoimmune diseases will reach a large population, and hopefully inspire those affected by these diseases to take action.

“Raising awareness for a disease that people don’t know about or understand is a daunting task,” said Jenna. “It takes courage to step off, put one foot in front of the other, and let your voice be heard. Shoot for the moon. Even if we miss, we’ll land among the stars.”

Since 1970, the Arthritis National Research Foundation, a tax deductible charity based in Long Beach, CA, has supported exceptional young scientists who have become innovators and leaders in the field of arthritis research, autoimmunity and inflammation. ANRF’s goal is to cure arthritis by funding the next generation of researchers. Bringing in new, out of the box ideas, to encourage a continued commitment to pushing the field of arthritis research forward towards a cure.