Tamils for Obama said to DMK chief Karunanidhi in a letter that he had a unique opportunity to push Congress Party in the right direction in support of an International Investigation of war crimes committed by Sri Lanka during and after the civil war. 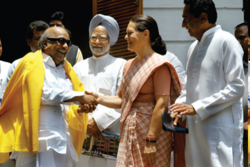 Tamils for Obama sent a letter to DMK chief Karunanidhi pointing out that he has a rare chance to force the Indian government to bring a resolution in favor of an international investigation at a meeting of the United Nation Human Rights Council (UNHRC). The current session of the UNHRC is taking place in Geneva through the end of March.

The letter says that Mr. Karunanidhi "would gain only praise and appreciation" if he used his leverage as a member of the Congress Party's shaky coalition government to force them to " support an international investigation into war crimes against the Tamils during and after the recent Sri Lankan civil war." The resolution would be introduced during the current session of the UNHRC.

The letter noted that Chief Minister Jayalaithaa of Tamil Nadu had been a consistent supporter of the interests of Sri Lankan Tamils, while Mr. Karunanidhi had not. "We thank her for it," the letter read, and then addressed Mr. Karunanidhi, saying “We remember that in 2009, when Tamils were being slaughtered on the island of Ceylon, you chose to take a quiet and timid position consistent with the Congress policy of indirectly supporting the Colombo government."

The letter said “We think that the Indian Congress Party is finally moving in the direction of supporting an international investigation of the Colombo government's targeted killings of Tamil civilians during the civil war. We maintain that, with the world watching, this is the way that the Congress Party is going to go. Here is your chance to recognize when a powerful group is almost ready to do the right thing, and you get to give them the push that sends them in the direction of light and the justice."

The letter concluded that Mr. Karunanidhi will be the one who set the Congress Party on the right road, and that the party members will admire him for doing this. He will also have a chance to do something to bring justice to the Tamils, and they will probably think better of him for doing it.