Young Guns Produce, Inc., one of the biggest suppliers and online Hatch green chile sellers in the nation, expects the 2013 crop to be bigger and better than before. 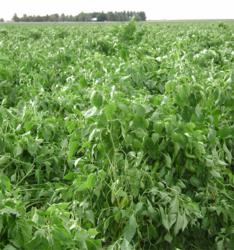 Young Guns Produce, Inc., expects to have a bigger and better crop of green chile than last year.

We’re confident that if people want a chile fix, we can supply it!

“We’re currently getting the soil ready,” says Franzoy, “and the seed selection for this year is amazing!”

Franzoy says that each variety they plant this year has been improved over the years with the help of the Chile Pepper Institute at New Mexico State University in Las Cruces, New Mexico.

This year’s varieties include improved chile peppers in their mild, medium, hot and extra hot varieties.

For 2013 they will be using New Mexico 6-4 for their mild varieties, which according to Franzoy has “the most favorable flavor for mild.”

They will be using a new and improved Sandia variety that Franzoy says has a larger and heavier pod than previous varieties, meaning more of the fleshy chile pepper for consumers.

For their medium-heat chile they will be growing the Big Jim variety for 2013.

And, Franzoy says they are continuing to improve their extra hot variety and expects this year to have a chile that “will test around 15,000 scoville units.”

Earlier this year Young Guns Produce, Inc. announced that they will be increasing their green chile crop by 20% over last year’s production to keep up with the growing demand for their chile.