Retired NFL punter Dave Brader will be coaching at the 2013 Husted Kicking Pro Kicking Camp being held in Boca Raton, FL, from March 9-14, 2013 according to kicking coach Michael Husted. 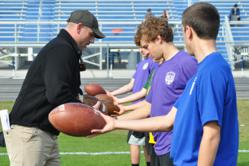 The athletes at the Husted Kicking Pro Camp are the ‘best of the best’ available on the free agent market. Dave Brader.

Retired NFL punter Dave Brader, of Husted Kicking, will be coaching at the 2013 Husted Kicking Pro Kicking Camp being held in Boca Raton, FL, from March 9-14, 2013 according to kicking coach Michael Husted.

“I worked Louie's first pro camp in Mesa, AZ 10 years ago while I was still trying to get my break,” says Brader. “After signing -as a result of my performance(s) at the Aguiar/Husted Pro Camp- it was a natural fit to transition to coach alongside the best coaches in the country at the best pro showcase in the country.”

“The athletes at the Husted Kicking Pro Camp are the ‘best of the best’ available on the free agent market,” says Brader. “This is the 'go to camp' for any specialist looking for a crack at the NFL.”

A future in professional football was never one of Brader’s goals; professional baseball, however, was in his sight. It was at a regional workout for the Atlanta Braves in 1999 when he picked up a football someone was throwing and punted it; as luck so has it, a scout for the St. Louis Rams was there with his son, the rest as they say, is history.

Brader began fine tuning his skills and with the coaching of WGHS grad and former NFL coach Hank Kuhlmann c/o ‘54, Ray Pelfrey, Kelly Goodburn and Louie Aguiar, and signed an NFL contract with the Jacksonville Jaguars in 2005 before a career ending injury forced him to the sideline in 2006.

Michael Husted, who kicked in the NFL for 9 years, started the Pro Camp with retired NFL punter Louie Aguiar. However Aguiar has recently been hired as an Assistant Special Teams Coach with the New York Jets and will not be part of this years’ camp.

Aguair says he will miss being at the Pro Camp as a coach this year, but looks forward to being there as a representative for the Jets.

“Leaving the Pro Camp, and working with Michael Husted, is perhaps the toughest thing I’ve had to do in my professional career,” says Aguiar. “However, Michael is an outstanding coach, and he is great at what he does. So I am looking forward to seeing him ‘from the team side’ at this year’s Pro Camp.”

Husted says the Husted Kicking Pro Camp is the place for those free agent kicking specialists, not invited to the NFL Combine, to be seen by NFL scouts and pro staff. And for those kicking specialists still in college, Husted says it means the chance to receive instruction and guidance from some of the best coaches in the nation such as Dave Brader.