Is Kupo the next celebrity dog? 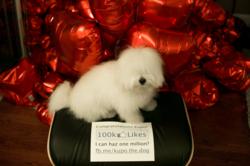 Could Kupo be the next famous dog on the internet?

Sometimes people say he looks like a rug. Other times, he is mistaken for a teddy bear. However, if there's one thing certain about Kupo, no one would call him unpopular. With a growing audience for his Facebook page, this fluffy white puppy is rapidly becoming the next internet sensation, following in the paw-steps of his idols, Boo, the world's cutest dog, and Mark Zuckerberg's own dog Beast.

Kupo's Facebook page has just passed 100,000 likes, no small feat for a puppy that's less than a year old. But if his recent posts are any indication, he's set his sights higher, looking to reach a million likes and entering into the rarefied space reserved for only a small handful of famous pooches.

Kupo's page features daily posts where he shares photos of his adventures, answers questions, and gives advice. Ranging from uplifting to silly, he speaks with confidence in his posts, despite his breed not being known to be the smartest. For example, in one post answering the frequently asked question of how he's able to see through all his hair, he enthusiastically answered "With my nose!", addressing the question, but raising more curiosity about this delightful little dog.

While interest in Kupo initially started in the United States, his popularity has extended internationally, and he has now amassed a strong fan base in Brazil where followers affectionately cry out "Fofo" and "Lindo" each time he posts a new photo.

The popularity of Kupo has helped raise awareness of the Coton de Tulear, an uncommon breed that's being increasingly recommended for its unique combination of being extremely soft and fluffy, while being non-sheding and hypoallergenic. In addition to having no congenital health issues and minimal exercise requirements, a Coton can be a great choice for many families looking for a friendly lap pet to live indoors.

Kupo has also recently expanded his presence to Twitter and Pinterest as well, and in the coming year may look to offline channels as well.

If you want to support one dog's dreams of making it big, or just need a daily dose of cute in your life, like Kupo on Facebook today - http://www.facebook.com/kupo.the.dog