Professor Dennett to lecture on Cultural evolution and the well-equipped brain as part of the College's compulsory Science Literacy module. 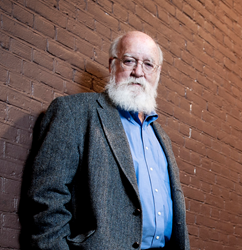 I'm delighted to welcome Daniel Dennett to NCH and I know that faculty and students alike are looking forward to his lectures with great interest.

Professor A C Grayling, Master of NCH said: “I'm delighted to welcome Daniel Dennett to NCH and I know that faculty and students alike are looking forward to his lectures with great interest.”

Professor Dennett’s lecture series forms part of the Science Literacy module, which is being taught in its entirety by Professors Richard Dawkins, Lawrence Krauss, Steven Pinker and Daniel C Dennett.

All students at the College take the Science Literacy module, in addition to their undergraduate degree, contextual course, modules in Applied Ethics and Logic & Critical Thinking, plus the Professional Programme.

For further information, please contact: The NCH Press Office on 020 7400 7398 or email nchum(at)hanovercomms(dot)com.

New College of the Humanities (NCH) offers a new model of higher education for the humanities in the UK. NCH students enjoy one of the best staff-to-student ratios in UK higher education and benefit from a high number of quality contact hours as well as engaging and challenging one-to-one tutorials.

Our Professors are international experts in their fields and our full time academic staff members have been selected for their proven ability for teaching in addition to their research interests.

NCH welcomed its first intake of students in September 2012 and prepares students for undergraduate degrees in: Economics BSc; English BA; History BA; Law LLB and Philosophy BA. The College has recently announced that the Politics & International Relations BSc will also be offered from 2013.

In addition to their 12-module degree, all NCH students study a further seven modules. This is comprised of four modules from another degree subject or Art History, or Classical Studies as a contextual course and three core modules in Applied Ethics, Logic & Critical Thinking, and Science Literacy. All students also follow the College’s Professional Programme.

The College’s rolling applications process is independent of UCAS and applications can be made in addition to the five UCAS choices. The next application deadline is 11 March 2013.

Visit http://www.NCHum.org for all enquiries and applications.