France embraces ‘Azerbaijan Through the Lens’

More than 150 people attended the opening of the 'Azerbaijan Through the Lens' photography exhibition in Paris, organised by The European Azerbaijan Society 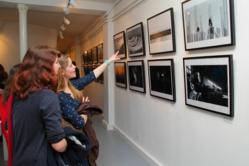 The photographs provided a valuable insight into Azerbaijan's rich history, landscape and culture

I believe these remarkable photographs provide an inspiration to experience more of the beauty of Azerbaijan.

On 6 March, more than 150 people attended the opening of a stunning new photography exhibition at the Espace Beaurepaire, located in the tenth arrondissement of Paris. In total, this exhibition, organised by The European Azerbaijan Society (TEAS), showcased 100 photographs of contemporary Azerbaijani people, culture, landscapes and architecture.

Originally presented in London in November 2012, these photographs were selected from around 750 submissions received from photographers based in Azerbaijan and across the world that were entered for a TEAS-run competition. The exhibition succeeded in capturing the very essence of this fascinating country, which sits on the Caspian Sea. All of those who attended were entranced by the views of this country and the remarkable quality of the images.

In her introduction, Eliza Pieter, Head, TEAS France, said: “This competition reached out to both amateur and professional photographers. It provided an opportunity to present the many diverse aspects of Azerbaijan, in terms of architecture, portraits, nature and elements of culture. I hope that this exhibition will encourage those who have never visited Azerbaijan to travel there, and those who have been to the country to return and see its new face.”

Renowned royal photographer Henry Dallal, who sat on the judging panel and also was present in Paris, said: “I was very honoured to be asked by TEAS to help judge the competition and to attend the exhibition when it was first shown in London. The other judge was Caroline Metcalfe, Photographic Director, Condé Nast Traveller magazine, who knows a great deal about how to present a country photographically. I have been to Azerbaijan several times, and these images certainly represent the variety of the nation. Even Azerbaijanis often do not take time to travel outside their home region and explore their own country. I believe these remarkable photographs provide an inspiration to experience more of the beauty of Azerbaijan.”

At the London opening of the exhibition, the three winning entries were revealed, and these photographers attended the Paris opening.

The winner was Asim Talib for his delightful photograph Old Men, taken in 1985 in Kelbajar, Karabakh (currently occupied by Armenia). Second prize was taken by an amazing representation of the ceiling of the Bibi Heybat Mosque by Etibar Jafarov. Originally constructed in the 13th Century, and visited by Alexandre Dumas in the 1840s, this was blown by the Bolsheviks in 1936. Following the regaining of Azerbaijani independence, the reconstructed mosque was reopened in 1997.

Asim Talib commented: “I took the winning photograph nearly 30 years ago. If you add the ages of the people in the photo when it was taken, this would equal more than 500 years. I recall that the elderly men in the photograph were discussing their anecdotes of childhood and the lady was joining in the laughter.”

Fuad Babayev took the photograph that received the third prize – The Flames and the Needle. This focused on the Flame Towers, a new icon of Baku, juxtaposed against the telecom tower. A keen amateur photographer, Fuad has embraced social media and currently more than 10,000 followers on Google +.

A selection of images from the exhibition can be seen at http://www.teas.eu/azerbaijan-through-the-lens. The exhibition will tour all the major European cities in which TEAS has offices during the course of 2013, and will open in Berlin in early April.