Hosting Providers Use Worldwide Data to Create a Visual Representation of the Internet. 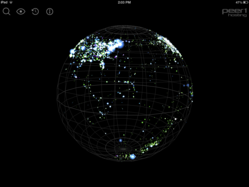 We’re passionate about the Internet and continue to look for ways to demonstrate and share that with the world.

PEER 1 Hosting, the global IT hosting provider, today launches its Map of the Internet app, a 3D visualization of the world’s networks and how they are connected.

A continuation of the Map of the Internet infographic poster created in 2011, the interactive app brings to life what the Internet physically looks like using the network addresses of ISPs, Internet exchange points, universities and other organizations that route traffic online.

The app is part of PEER 1 Hosting’s mission to be the most human company on the web, further demonstrating its passion, expertise and thought leadership around networking and the Internet.

PEER 1 Hosting’s Map of the Internet app serves as an educational tool for the hosting industry, academia and everyone interested in networking and the physical infrastructure of the Internet. Based on Internet topology from the Cooperative Association for Internet Data Analysis (CAIDA), the app showcases the Internet’s evolution from its beginning to the present day, depicting 22,961 autonomous system nodes joined by 50,519 connections (source: CAIDA.org).

Additional features allow users to perform a trace route between where they are currently located to another destination on the map, generating the route with real-time data and calculating the time it takes for the data to travel between the two locations.

Users can see where popular companies like Google and Facebook are located on the Internet, as well as when such companies first appeared online. In addition to showcasing the Internet’s history, the app allows users to see how the Internet will evolve between now and 2020.

Robert Miggins, senior vice president, business development, PEER 1 Hosting said: “We’re passionate about the Internet and continue to look for ways to demonstrate and share that with the world; the Map of the Internet app exemplifies those efforts.”

“People are curious about what’s going on under the hood of the Internet and this app allows users to easily view and understand how it works.”

About PEER 1 Hosting
PEER 1 Hosting is one of the world's leading web hosting providers, specialising in Managed Hosting, Dedicated Servers, Colocation and Cloud Services. Based in Vancouver, Canada, with European operations headquartered in Southampton, UK, the company has been serving commercial customer needs since 1999. PEER 1 Hosting is built on two obsessions: Ping & People. ‘Ping’ represents its commitment to best-in-breed technology, founded on a high performance 10Gbps FastFiber Network(tm) connected by 20 state-of-the-art data centres. ‘People’ represents its commitment to delivering outstanding customer service to its more than 13,000 customers worldwide, backed by a 100 per cent uptime guarantee. For more information visit: http://www.peer1hosting.co.uk