PlayTales develops biggest children’s app of 2013: The Grand Adventure of The Little Prince 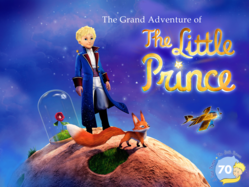 “It’s been an honor working with such an iconic character. This is The Little Prince’s first interactive app of its kind and we are so excited to be the ones chosen for developing it.

The Little Prince is an animated series based on the novel “Le Petit Prince” written by Antoine de Sant-Exupéry. The novel has become the most read and translated French story in history with translations in over 270 languages and over 140 million copies sold worldwide. It is the most translated non-religious book in the history of literature.

Le Petit Prince Multimedia (LPPM) chose PlayTales, a subsidiary of Genera Interactive, for the production of The Little Prince’s first interactive application because of the group’s ability to create a one-of-a-kind user experience through its expertise and innovative techniques. Olivier d’Agay, CEO of LPPM, provides insight on the decision of selecting PlayTales as the developer of the project:

“After seeing the work of the PlayTales team and the potential their technology offered we knew they were the best choice for this project. We were confident that they’d be able to develop an amazing application for The Little Prince and based on the final product we were right.”

Enrique Tapias, CEO of PlayTales, comments on the launch of the new app,

“It’s been an honor working with such an iconic character. This is The Little Prince’s first interactive app of its kind and we are so excited to be the ones chosen for developing it. Now children all over the world will be able to interact with their favorite characters in a whole new way.”

The Grand Adventure of The Little Prince application features 3D-like animation and users have the ability to navigate through an enchanting virtual world. There are nine planets wherein users can participate in unique games and activities as well as interact with their favorite characters from the original story.

The Grand Adventure of The Little Prince is now available for iOS users worldwide. The app can be downloaded in English, Spanish, French, Italian, and Portuguese, and is available in Apple’s App Store.

About PlayTales:
PlayTales is a wholly-owned subsidiary of Genera Interactive, an internationally based multi-platform mobile entertainment and utilities provider with offices in USA, UK, Spain, Romania, and China. Founded in 2010, PlayTales develops and distributes interactive children's books within its award-winning bookstore apps. PlayTales applications can be downloaded from Apple's App Store, Google Play, Amazon.com, Blackberry App World, Intel App Up, and Verizon V-Cast. Like PlayTales on Facebook and follow them on Twitter @PlayTales.

About The Little Prince:
First published in 1943, The Little Prince is French aviator Antoine de Saint-Exupéry’s most famous novella and has been one of the most enduring works of literature ever written. While it is geared towards children, it spans generations, and is rooted in profound observations about life and human nature to which all can relate. With international licensees already in existence, The Little Prince has proven sales track records with 40 licensees in France, 20 in Germany, 15 in Brazil, and 30 in Japan and Korea.