The antique Irish “Royal Tara Brooch” that launched the Celtic Revival, will be on display in an exhibit of over 60 pieces of antique Celtic jewelry from the past 160 years at Walker Metalsmiths Celtic Jewelry in Fairport, NY. The exhibit will tell the story of how the traditional forms and intricate knot-work designs of medieval Irish and Scottish jewelry evolved from the time of the Potato Famine to the beginning of its present popularity. 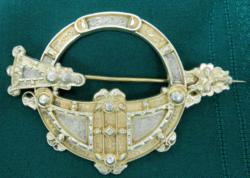 The "Royal Tara Brooch" on exhibit at Walker Metalsmiths Celtic Jewelry in Fairport, NY. This gilded silver copy of an early medieval Celtic brooch was manufactured in Dublin in the 1850s and was one

“When I began making Celtic jewelry, in my mind I connected what I was doing to the great medieval masterpieces of Celtic art. But that link with the ancient style was very much influenced by what others had done in more recent history.”

News that the “Royal Tara Brooch” will be on exhibit during St. Patrick’s Day at Walker Metalsmiths Celtic Jewelry in Fairport, NY may come as a surprise. The 8th century masterpiece of Celtic jewelry design and craftsmanship known as the “Tara Brooch” is one of the most closely guarded treasures in the National Museum of Ireland. The brooch's confusing identity goes back to shortly after it was discovered in 1850.

A Dublin jeweler, George Waterhouse, acquired the early medieval brooch from the peasant family that originally found it near Bettystown, County Meath, Ireland. He then manufactured high quality facsimiles, which he promoted as "The Royal Tara Brooch". On display at Walker's is one of these Waterhouse Tara Brooches, made over a hundred years ago, but far more modern than the thirteen hundred year old original.

In addition to the Tara Brooch, over sixty other examples of modern Celtic jewelry made between 1840 and 1980 will be on display. The exhibit, titled The Modern History of Celtic Jewelry, tells the story of how the traditional forms and designs of medieval Irish and Scottish jewelry evolved from the time of the Potato Famine to the beginning of its present popularity. Through the 19th and 20th centuries the historical designs of interlaced ornament and traditional symbols evolved and adapted to modern tastes and purposes. The style also went into and out of fashion throughout the years and came to serve different purposes with communities as diverse as cosmopolitan Dubliners, craftsmen working on remote Scottish islands, and descendants of Irish and Scottish immigrants.

The ancient traditions of Celtic jewelry have become a part of how the Irish, as well as the Scots have expressed their cultural identity. Usually the story of this tradition focuses on very old prototypes, the museum pieces turned up by archaeologists or the legend of the original Claddagh ring. In our imagination, we connect the popular Celtic jewelry of today with the distant past. The exhibit and its accompanying catalog tells the story of the more recent past.
The project’s instigator, jeweler Stephen Walker, explains, “When I began making Celtic jewelry, in my mind I connected what I was doing to the great medieval masterpieces of Celtic art. But that link with the ancient style was very much influenced by what others had done in more recent history. We tend to imagine our heritage on a grand time scale of centuries and millennia, but in reality, what we get from the generations of our parents and grandparents is our more authentic inheritance.”

The Irish American Cultural Institute of Rochester is assisting the project by hosting a free lecture on the jewelry of the Irish Celtic Revival by Tara Kelly at 135 Basil Hall, St. John Fisher College at 7:30 pm on Tuesday March 12. Ms Kelly, who is currently a PhD candidate in Art History at Trinity College Dublin, is preparing an illustrated catalog of the exhibit that will include articles by Scottish historian Mairi MacArthur, Irish craftsman Aidan Breen and jeweler Stephen Walker.

An opening reception for the exhibit at 140 Packets Landing in Fairport will be on Friday March 15 from 5 to 8. Regular hours at Walker Metalsmiths are Wednesday through Saturday, 10 to 6 . Admission is free to the public. The exhibit will remain on display through Fairport Canal Days, closing June 2.

Walker Metalsmiths is a family run Celtic jewelry shop featuring the artistry of Stephen Walker, specializing in gold Celtic rings and Celtic crosses. The work of some of the finest Celtic craftsmen in Scotland and Ireland is also represented at their two shops in Fairport, NY and Andover, NY.