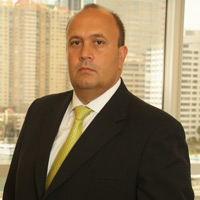 De La Peña Group’s move was crucial in the firm’s goal to digitalize its practice. “Many years ago, it was the standard for every attorney to have one or even two assistants,” explains De la Peña, “but as the courts and the legal industry in general move to a paperless practice, it is our goal to surpass the guidelines set by the courts and the Florida Bar in order to compete with larger firms.”

Within the last year, the courts have transitioned to new mandatory procedures that require attorneys to serve and file motions and pleadings electronically, eliminating the need for the piles of papers that lawyers and legal assistants were used to preparing and mailing.

Entering the digital age was a long process that included the scanning and saving of all case-related documents—a large-scale project that began years before the decision to move to the Brickell World Plaza. De La Peña Group has been a paperless office since 2008. “Of course a fully paperless law firm is hard to come by. We are required to keep original copies of certain documents, but we have significantly reduced our need for filing space within the past years,” says De la Peña.

One major commitment of the firm with their transition to a paperless office is its recycling program, supported by the building’s own recycling center. The firm is committed to raising the bar when it comes to environmental sustainability, and all employees are provided with recycling containers to make recycling a breeze.

Another big change for the firm: connectivity. With new offices, De La Peña Group is directly connected to the NAP of the Americas, one of the largest telecommunications projects in the world, which is specifically designed to link Latin America with the rest of the world. The project has made Miami one of the top interconnected cities in the world, and De La Peña Group has positioned itself in the middle of the telecommunications gateway to the Americas.

The firm has also moved from desktop workstations to server-based laptops. Although servers have been used for years by law firms in order to share documents throughout the office, the flexibility of a faster and more efficient server allows attorneys at De La Peña Group to be readily available to their clients. Whether in the office, the courthouse, or even on a business trip, attorneys are able to keep connected and access the server anywhere in the world. The ease of connection has also allowed the firm to create a plan in case of emergencies. “Miami is prone to hurricanes, and some years, it is inevitable that we will have to close the office because of the hazardous conditions outside. Having portable laptops connected to our server allows all of our attorneys and staff to work from home or an alternative safe location,” explained De la Peña.

De La Peña Group is a law firm providing the highest quality of professional services and personal attention to individuals, their families, and their businesses, regardless of size, status or complexity of their particular matter. Leoncio E. de la Peña D. is listed in the 2011 edition of the Best Lawyers in America publication, and in the 2012 edition of the Wall Street Journal as one of the Best Attorneys in Florida, as selected by Peer Recognition.

If you would like more information about this topic, or to schedule an interview with Leoncio E. de la Peña D., please call 305.377.0909 or email at avargas(at)lmcglc(dot)com.