Classic and influential musical with beloved Bernstein-Sondheim score will be in Modesto for five performances. 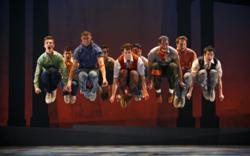 When “West Side Story” opened on Broadway more than 50 years ago, it fundamentally altered the form of musicals. The theatricality of its presentation, the cinematic flow of its staging, and the integration of script, song, dance and set continue to influence Broadway.

Now a new, spectacularly staged production of “West Side Story” is on a national tour and will be presented at the Gallo Center for the Arts Friday – Sunday, April 5 – 7, for five performances.

“West Side Story,” in New York’s Upper West Side, tells the story of star-crossed lovers Tony and Maria as they struggle to rise above the hatred and intolerance that surrounds them, including the rivalry between the Jets and the Sharks, two teenage street gangs of different ethnic backgrounds.

The Bernstein and Sondheim score is considered to be one of the finest in Broadway history. Nearly every song is now a standard, among them “Something’s Coming,” “Tonight,” “America,” “I Feel Pretty” and “Somewhere.”

”It remains Broadway’s best dance-driven musical,” says the Associated press. “Five decades have not dimmed the extraordinary choreography or the score that pulsates throughout.”