The British Are Coming Back…and the Americans and French, Too

Battle of the Hook Reenactment Returns to Gloucester Oct. 19-20 at the Inn at Warner Hall. 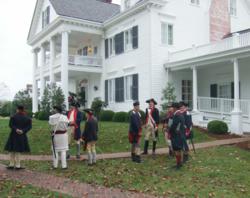 The British are coming back, and the Americans and French, too, for the Battle of the Hook Revolutionary War reenactment at the Inn at Warner Hall.

Historic battles will be brought to life by living historians.

The British are coming back. And the Americans and French, too. On October 19-20, 2013, at the Inn at Warner Hall, the Allies will engage the British Legion and other Crown forces in a reenactment of the 1781 Battle of the Hook that took place in Gloucester County, helping win the Siege of Yorktown and America's independence.

The reenactment, one of the largest recreations of a Revolutionary War battle, will bring together more than 1,000 infantry, cavalry, artillery and maritime landing reenactors from across the country at the Inn at Warner Hall, home of President George Washington’s ancestors.

The event will be free and open to the public.

“This Revolutionary War reenactment celebrated General Washington’s victory over the British Army,” said Warren Deal, the Battle of the Hook planning committee’s chairman. “Historic battles will be brought to life by living historians. Recreated military units from across the country will encamp near the actual battlefields where the American Revolution was won after six long years of fighting.”

This is the second Battle of the Hook reenactment. The first took place at Warner Hall in 2008. The dozens of acres of farmland surrounding the Inn at Warner Hall will be filled with period appropriate camping and living historians, bringing the property to life in a historic way.

The events leading up to the Revolutionary War’s Yorktown Campaign and the subsequent victory of the Allies that insured the independence of the United States are well known. Less well known is the Battle of the Hook – the battle that took place across the York River from Yorktown 16 days before the British capitulation. Although rather brief, it included the largest cavalry engagement of the war, with more than 500 horsemen involved.

The Battle of the Hook reenactment in Gloucester is being financed entirely by donations, including the educational programs.

The Inn at Warner Hall is located roughly three and a half miles from U.S. Route 17 and a 30-minute drive from Colonial Williamsburg. The battlefields of Yorktown are within 15 minutes and Jamestown, America’s first settlement, is a 50-minute drive along the scenic Colonial Parkway. The state capitol of Richmond, the Norfolk Harbor, and Virginia Beach are within an hour’s drive.

For more information about the Battle of the Hook, visit http://www.battleofthehook.org. Learn more about the Inn at Warner Hall at http://www.warnerhall.com.

ABOUT THE INN AT WARNER HALL:

The Inn at Warner Hall is located in Gloucester, Va. Some of the most notable names in American history are direct descendants of Augustine Warner, including President George Washington.Inn at Warner Hall