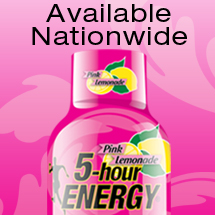 The great support from fans allowed 5-hour ENERGY® to donate $387,531.20 to the AVON Breast Cancer Foundation. Shortly after the Pink Lemonade flavor was discontinued, the response was astonishing and fans wanted 5-hour ENERGY® to bring the flavor back. All of this feedback was taken into consideration and Pink Lemonade was put back into production and was permanently placed on to store shelves.