A San Francisco based startup that makes it easy to search the enterprise cloud won the Enterprise 1.0 Award for the best new enterprise product at the LAUNCH 2013 Festival. Synata's technology offers a “Google-quality” search service for the enterprise cloud, and allows users to quickly and easily search across their enterprise cloud services for files, documents, contacts, emails, and other data, and presents the results on one screen, no matter where the data is stored. 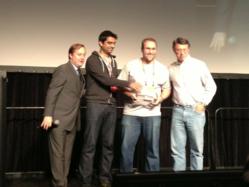 We really want to make everyone’s life a bit better by making it easier to find the needle in their enterprise data haystack, and this is certainly a sign that we're on to something special.

“Being a part of LAUNCH 2013 was an amazing experience,” said Synata's CEO Patrick White, “and it’s great getting validation like this for a product we’ve been working on so hard. We really want to make everyone’s life a bit better by making it easier to find the needle in their enterprise data haystack, and this is certainly a sign that we're on to something special.”

Synata’s vision is to provide the easiest to setup enterprise search platform that anyone, from any level of an organization, could have up and running in minutes. At the event, they announced the pending release of their application, and encouraged anyone who uses multiple enterprise services, or runs into the problem of searching across multiple silos, to contact them at pat.white(at)synata(dot)com, or to sign up online at http://www.synata.com.

Synata was formed after Patrick White and Shailesh Saini realized that, even though the cloud promised openness, so many of the services they were using were just another set of data silos, and fell short of the cloud’s vision to provide data transparency. Synata believes that having the ability to quickly and easily search across all data sources will take full advantage of the cloud and fundamentally change the way people use sales, marketing, and customer service data.

Synata would like to thank the amazing team from the LAUNCH 2013 Festival, and is asking anyone interested in their software to either email them at pat.white(at)synata(dot)com, or sign up online at http://www.synata.com.