Net company growth reached a record high in Macclesfield during 2012, according to new research from leading company formation agents, Duport.co.uk. 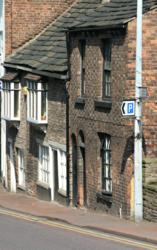 With a business base that is becoming more diverse and some exciting regeneration plans in development, the future of the town looks very bright indeed

Company formations also reached an all-time high during the year, with 887 new companies formed - more than any other year on record for the area and a 9% rise on the previous year.

There are currently several regeneration plans in the pipeline for Macclesfield, which could be attracting new companies to the area. The town centre proposals include a new 9 screen cinema, a new public square and a new multi-storey car park - all of which are intended to increase footfall and encourage town centre spending.

“The results in our report suggest that the Macclesfield economy is gaining momentum, with new companies flocking to set up there.

“With a business base that is becoming more diverse and some exciting regeneration plans in development, the future of the town looks very bright indeed.”

The Duport Business Confidence Report for Macclesfield provides accurate data that can be used to gain an insight into the local business landscape. More information and statistics can be found at http://www.duport.co.uk/macclesfield.