Woodstock Production releases a quality, unique space shooter at an affordable price. Space Game 2 is a unique take on space shooters and is for Windows 64 bit computers. 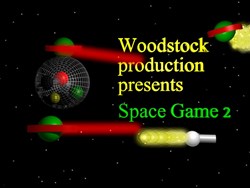 The release of Space Game 2 is the result of our commitment to providing low cost games without compromising quality and it will motivate us to continue to serve our mission.

Jason Woodstock has been involved in video game design, programming, and production since 2011. Woodstock Production is known for such products as the original Space Game and their programming tutorials online. “Woodstock Production is in a great position to make a name for ourselves in the Windows PC gaming market. We are definitely on our way to achieving our mission of providing quality, low cost games for the Windows platform,” added Jason. The company has recently indicated plans to expand its lineup.

About Space Game 2
Space Game 2: Universal Invasion is a Python scripted for the Windows platform running in 64-bit mode.

Space Game 2: Universal Invasion is turret space shooter. The turret can shoot background objects and use those destroyed objects to eradicate your enemies. The turret can also score multiple points from hitting an exploding enemy. This is called a critical combo.

In Story Mode, players battle an entrepreneurial alien bent on universal domination. The story progresses based on players reaching milestones in the game.