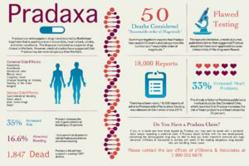 d’Oliveira & Associates has posted a new infographic to its website detailing the side effects and the elevated risks of bleeding associated with using the anticoagulant drug Pradaxa. As reported by the FDA, common side effects of the drug may include headaches, nosebleeds, unusual bleeding or bruising, and indigestion*. The FDA also listed the more serious side effects of using Pradaxa which include gastrointestinal bleeding, heart attack, brain hemorrhage, and possibly death*. This anticoagulant drug increases the risk of gastrointestinal bleeding by 35 percent**. The most serious statistic against the drug is that it was determined to be the primary suspect in 1,847 patient deaths***.

The FDA approved Pradaxa for sale on the market in October 2010 and in its first two years on the market, Pradaxa accounted for more than $1 billion in sales for the drug maker Boehrigner Ingelheim*. The drug was marketed as a better option than the traditional drug, Warfarin. However, medical studies have discovered that Pradaxa is actually more dangerous than Warfarin, for example, a study conducted by the Cleveland Clinic found that the drug increased a patient’s risk of heart attacks by 33 percent compared to other similar drugs as reported by CBS News article “Study: Higher heart attack risk from pradaxa”**. Additionally, excessive bleeding from Warfarin has an antidote, Vitamin K, but no such antidote exists for Pradaxa*. The number of side effects combined with the absence of an antidote has caused patients to file nearly 18,000 adverse event reports with the FDA*. According to Adverse Events, an organization that standardizes, the most common side effects were gastrointestingal bleeding (1668 reports), indigestion (928 reports), and unusual bleeding (875 reports)***.

Visit the Pradaxa webpage and view the infographic [HERE.

Do You Take Pradaxa and Suffer From Bleeding or Heart Problems?

If you or a loved one has been injured by Pradaxa, you may want to speak with a personal injury lawyer regarding a potential claim. A Pradaxa lawyer familiar with the new developments concerning the anticoagulant drug may be able to help you make important personal and legal decisions. d'Oliveira & Associates, P.C. is working with some of the leading dangerous drug lawyers who are handling these cases.