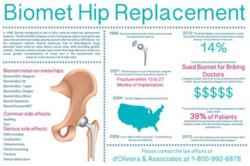 In 1994, Biomet introduced its line of metal-on-metal hip replacement systems including the M2a-Ringloc, M2a-Taper, M2a-38, and M2a-Magnum. According to the press release “The Performance of Modern All-Metal Bearings” from Biomet Orthopedics, over 110,000 patients were implanted with the M2a-Magnum from 1999 to 2009.* The Chicago Tribune reported that this hip device is the second most popular metal-on-metal hip implant after the DePuy ASR.** Biomet advertises on its website that the M2a-Magnum hip replacement system is durable and stable and that the metal-on-metal design helps the device resist wear and the large diameter head provides potentially greater motion and stability.***

“The Biomet infographic was released by our law firm in order to raise patient awareness about injuries that may be caused by metal-on-metal implants,” said attorney Paul d’Oliveira. “The tort system is intended to compensate innocent patients for injuries caused by doctors implanting a device or a defective device itself.”

The Biomet Hip infographic lists possible side effects as well as providing patients with information on medical studies about metal-on-metal hip replacement systems. Additionally, the infographic provides information about a recent settlement between Biomet and the Security Exchange Commission for violations of the Foreign Corrupt Practices Act.******

Visit the Biomet webpage and view the infographic HERE!

If you or a loved one has experienced metal-on-metal side effects from the Biomet M2a-Magnum, you may want to speak with a lawyer regarding a potential claim. A personal injury attorney familiar with new developments regarding Biomet devices may be able to help you make important personal and legal decisions. d’Oliveira & Associates, P.C, is working with some of the leading metal-on-metal lawyers in the country who are handling these cases.