“Fashion Meets Science: Introducing Nylon” shows how nylon revolutionized the fashion industry and influenced how people have dressed since its launch in 1938 by the DuPont Company. 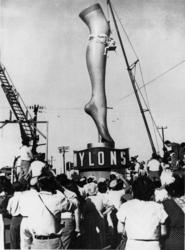 Hagley Museum and Library is displaying a portion of its fashion collection for the first time in its newest exhibit, “Fashion Meets Science: Introducing Nylon.” This exhibit shows how nylon revolutionized the fashion industry and influenced how people have dressed since its launch in 1938 by the DuPont Company. “Fashion Meets Science: Introducing Nylon” opens on April 6, 2013, and runs through March 31, 2014. The exhibit is included in admission and free for members and children five and under.

“Fashion Meets Science: Introducing Nylon” celebrates the 75th anniversary of nylon’s introduction to market. On October 27, 1938, a brand new material named nylon was announced to the public. Created in DuPont’s labs, nylon replaced silk in the ladies hosiery industry. Nylon was so popular that its early sales created near riots. The highlight of the exhibit is the early development of nylon and its impact on the fashion industry, but it includes other uses for the discovery such as parachutes, toothbrushes, and carpet.

An Exhibit of Firsts
“Fashion Meets Science: Introducing Nylon” highlights “firsts” of this discovery from pure science. Visitors will be able to view the first polyamide fiber sample (basis of nylon) and first souvenir sample of nylon thread, first all-nylon woven fabric, one of the first pairs of stockings manufactured at the Experimental Station, and the first pair of seamless stockings. The first wedding dress made of nylon (1942), first dress made of 100 percent spun nylon (1949), and first nylon football pants will also be on display in addition to other nylon “firsts.”

The exhibit is sponsored, in part, by W. L. Gore & Associates, Inc., and Lyons Companies.