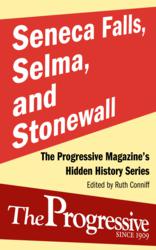 “This book will be fascinating not only to people who identify as progressives but to anyone with an interest in American politics, history, or journalism,” said Matthew Rothschild, editor of The Progressive.

Today, The Progressive Magazine announces publication of “Seneca Falls, Selma, and Stonewall,” the first installment in an exciting new e-book series from the magazine’s archives that span over a century.

“This book will be fascinating not only to people who identify as progressives but to anyone with an interest in American politics, history, or journalism,” said Matthew Rothschild, editor of The Progressive.

“For the first time, we have 104 years of progressive history available in a new digital archive,” Rothschild added. “That allows us to bring out these collections of incredible writing on the great issues of the day.”

Look for future e-books on the environment, labor history, and the peace movement.

The title “Seneca Falls, Selma, and Stonewall,” taken from President Obama’s second inaugural address, captures “a vision of our country’s historic journey toward a more just society--including women’s rights, racial equality, and gay rights,” said Ruth Conniff, political editor of the Progressive. “Here at The Progressive, we’ve been documenting that journey for the last 104 years.”

The Progressive, a national political magazine, was founded in 1909 by Fighting Bob La Follette. In its early years, it joined the cause of women’s suffrage under the leadership of Belle Case La Follette, Fighting Bob’s wife.

This collection also features writing from civil rights leaders, including James Baldwin and A. Phillip Randolph, in the 1950s and 1960s, and early celebrations of gay liberation by Allen Ginsberg and Harry Hay.

“For a hundred years, The Progressive has chronicled the great liberation movements of our time—feminism, racial equality, gay rights—through spectacular reporting, interviews and essays. Whether it’s Jane Addams wittily suggesting men be denied the vote, James Baldwin describing the inner struggles of living under racism, or Randy Shilts dissecting the early days of AIDS awareness in the gay community, The Progressive brings politics to life. This is a century’s worth of history that is also a century’s worth of hope.” --Katha Pollitt

“A vivid reminder of an alternative, progressive history in this country…”--Oliver Stone

The eBook was created in association with August Publications, a Middleton-based publisher of best-selling eBooks and websites.

For more information on The Progressive's new line of eBooks, visit the magazine's website.