What does science tell us about case factors that can lead to a wrongful conviction? American University Prof. Jon Gould's research reveals the first large-scale empirical study that has identified ten statistically significant factors that distinguish a wrongful conviction from a "near miss" (a "near miss" is a case in which an innocent defendant was acquitted or had charges dismissed before trial). 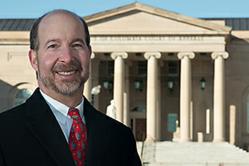 Surprisingly unlike airplane crashes or near midair collisions where the FAA moves in to investigate and reconstruct events in an effort to prevent future catastrophes, wrongful convictions have rarely been investigated beyond a specific case study

Why do innocent people go to jail in the United States every year for violent crimes they did not commit? It’s a serious question representing the ultimate miscarriage of justice—taking away the freedom of a factually innocent person while also allowing the guilty person to remain free. The U.S. Department of Justice’s National Institute of Justice (NIJ) wanted to learn answers to prevent wrongful convictions in the first place.

Jon B. Gould, J.D., Ph.D., a professor and the director of the Washington Institute for Public and International Affairs Research at American University and his team of researchers conducted a three year, first of its kind, large-scale empirical study Predicting Erroneous Convictions: A Social Science Approach to Miscarriages of Justice employing social scientific methods. It was funded by NIJ, and an NIJ video features Gould discussing wrongful convictions. After identifying 460 cases employing sophisticated analytical methods matched with a qualitative review of the cases from a panel of experts, 10 statistically significant factors were identified that distinguish a wrongful conviction from a “near miss” (a case in which an innocent defendant was acquitted or had charges dismissed before trial).

“Surprisingly unlike airplane crashes or near midair collisions where the FAA moves in to investigate and reconstruct events in an effort to prevent future catastrophes, wrongful convictions have rarely been investigated beyond a specific case study,” says Gould. “This is especially troubling since our criminal legal system is predicated on finding defendants guilty beyond a reasonable doubt before imprisoning them.”

The resulting 10 factor model applied by Gould and his team can be used to accurately predict an erroneous conviction versus a “near miss” nearly 91 percent of the time and is a useful tool for jurisdictions around the country to adopt remedies to address the 10 weaknesses with little cost according to Gould. The biggest investment is time, training and the acknowledgement that there is room for improvement from police, prosecutors and defense interests. A key to the model’s development was the unprecedented cooperation of an expert panel composed of stakeholders from the Association of Prosecuting Attorneys, Police Foundation, National Innocence Project and National District Attorneys Association.

From the quantitative and qualitative analysis, Gould and his team determined that prevention begins at the police station starting with the interrogation and investigation of alibis. This is followed by several opportunities along the way to identify the innocent before they are wrongfully convicted. For example, if forensic testing was conducted earlier and the results became available sooner to investigators innocent suspects could be freed. But faulty identifications, absence of early forensic test results, and inadequate investigation of alibis leads to what Gould characterizes as a “perfect storm” of errors made worse by collective tunnel vision. It should be noted much of this is unintentional.

The 10 factors in various combinations create this tunnel vision where a prosecutor with a weak case focuses on an accused even more intently rather than considering alternative suspects precisely because tunnel vision has set in – in other words the case seems to add up from the investigation but is sufficiently weak relying on perhaps a misidentification. For Gould this was the most surprising result of his research because he and his team expected strong prosecutorial cases to result in wrongful convictions since the evidence was compelling for the prosecutor to seek conviction but instead the study revealed the contrary. This led the team to look at weak defense counsel, poor explanation/presentation of forensic evidence, and police practices that could trigger the course of events spiraling out of control to a wrongful conviction because the weak prosecution case in turn is not adequately challenged by the defense attorney and the prosecution for one reason or the other may fail to disclose exculpatory evidence- a Brady violation.

Finally, the wrongfully convicted skew toward young suspects as well as those who have a prior criminal record. In other words, the defendants are not in a strong position to demand more from prosecutors or even their own defense counsel because they do not have the wherewithal to challenge the charges.

The study concludes that the social science approach is valid and effective in studying miscarriages of justice and should continue. Gould especially is interested in more research on the “near miss” cases to better learn how the criminal justice system can “get it right” when confronted with an innocent defendant. In the coming weeks, Gould will present his research in Seattle, Miami, New York City, Albany, NY, and North Carolina.