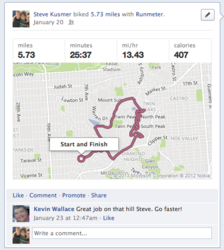 "Facebook supplies us with robust social capabilities, and our customers benefit from getting motivational feedback from Facebook friends during workouts, not just afterwards," said Steve Kusmer, CEO of Abvio.

Abvio Inc. today announced that their best-selling fitness apps for iPhone and iPad, Cyclemeter, Runmeter, and Walkmeter are among the apps using Facebook’s new Open Graph actions. As part of the announcement by Facebook this week, Abvio is making improvements to the way stories from Cyclemeter, Runmeter and Walkmeter are displayed on people’s timelines. Stories that Abvio’s apps post include a map, time, distance, speed, and calories. By clicking on the link in the Facebook story, you can see detailed workout data, including maps, graphs, splits, zones, intervals and other statistics about the workout.

With the most recent app update, friends of athletes can see their map and summary stats in the Facebook news feed, timeline, and Ticker. The map and stats are updated every few minutes during the workout. This builds upon the apps’ unique and innovative capability to speak comments and Likes from friends using text-to-speech technology, which provides encouragement and motivation from the athlete’s personal social circle.

In January 2013, Abvio announced that it had surpassed one million paid customers, making Cyclemeter, Runmeter and Walkmeter among the most successful in the App Store. Abvio’s CEO Steve Kusmer estimates that customer retention increases by approximately 33% year over year when athletes use Facebook.

“Facebook IS our social network,” said Kusmer. “We remain very focused on providing our customers with industry-leading capabilities that help them optimize their workouts, and the data to help them become healthier and fitter. Facebook supplies us with robust social capabilities, and our customers benefit from getting motivational feedback from Facebook friends during workouts, not just afterwards.”

Cyclemeter, Runmeter and Walkmeter enable people to post to Facebook once a workout is started, and the post is then updated every few minutes. While other apps for fitness can play pre-recorded cheers when a friend likes a workout post, Abvio’s apps were the first, and remain the only fitness apps to actually voice the comments and Likes on your workout posts. Comments are spoken using built-in text-to-speech technology.

About Cyclemeter, Runmeter and Walkmeter
With nine major releases, and more than three dozen updates over the past three years, Cyclemeter, Runmeter, and Walkmeter continue to be the most powerful GPS fitness applications for the iPhone and iPad. All three, in addition to the 5K Runmeter training application, are built from the same foundation, and come preconfigured for running, cycling, walking, and training respectively. Each app supports all features and activities. All are available on the Apple iTunes App Store (appstore.com/abvioinc) for $4.99 (US). One voice, for hearing replies from Facebook, Twitter, and dailymile.com, is included free. Subsequent voices are $0.99 (US) each via In App Purchase.

All company and product names are trademarks of their respective owners.