Schools have been rolling out iPads in classrooms at a healthy clip. A new case fo the iPad and iPad Mini offers rugged protection for students, along with customization option for school branding. 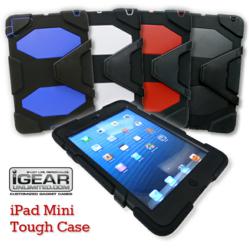 iGear’s Tough Case is built like a tank and offers hands down the best iPad protection in the industry.... It’s an excellent way to protect your iPad from daily use and abuse.

It’s been reported that iPads deployed in schools suffer damage rates of up to 10%-15%, with broken screens being the most common. The iGear Tough Case was designed to address this problem - iGear’s Tough Case features a multi-layer construction that’s supremely shock absorbent, a clear lens that protect’s the iPads’ glass screen, and now the case can be customized to show the school’s logo as well as barcode to help track devices with students.

According to an article published on Billings Gazette – "About 5 percent of the iPads purchased for school students and staffers in Powell Wyoming have had to be repaired or replaced since they were introduced last year. Eighty-one iPads worth $40,192 were damaged. Of those, seven belonged to teachers and administrators and 74 were assigned to students. The most common problem was broken screens.”

Kids can be rough with their toys, and that can cause a problem for schools deploying iPads in the classroom. Recent reports show that up to 15% of iPads are damaged within the first 2 weeks if not used in a protective case. Most of the damage is due to accidental dropping, leaving bent corners, scratched sides, and most commonly, broken screens.

Some schools are dealing with the problems by purchasing a protection plan from Apple, or purchasing cases for their iPads, or both. To ensure the deployment goes smoothly and minimize delays and administrative burdens, the best practice proved to be using a rugged case that protects the iPad no matter what happens.

Just because a case is claimed to be rugged doesn’t mean it will protect the device from daily use and abuse. Schools that bought what they thought were rugged cases are getting mixed results, too. According to Cathrine Butler-Olimb, District Technology Coordinator at Manitou Springs School District of Colorado, “We are using Gumdrop this year, and are having major problems with broken screens.”

One company put its product through the “ultimate ruggedness test”. A rugged phone case protected an iPhone dropped a second floor window to a concrete driveway, and the phone escaped unscratched, while recording video the whole time. It’s the Tough Case made by iGearUnlimited, and now the company is bringing the same design and protection to the iPad and iPad Mini.

The Tough Case offers multi-layer protection using a combination of (1) an outer soft rubber shell, (2) an inner polycarbonate hard case, and (3) a clear lens which covers the screen. This case is supremely shock absorbent and since all buttons and ports are tightly sealed, the Tough Case provides rain and splash protection, while giving the user full access at the same time. The handy grip offers a convenient way to hold the iPad with one hand, and also functions as kickstand for movie watching.

“iGear’s Tough Case is built like a tank and offers hands-down the best iPad protection in the industry.” says Jimmy Sun, president of iGearUnlimited.com. “It’s an excellent way to protect your iPad from daily use and abuse.”

The customization is done using iGear’s exclusive Tough Skin decals – a high quality vinyl decal laminated with a scratch-resistant protective film. Since the company is a G7 Qualified Master Printer, customers can rest assured their artwork will print to the highest standards of color accuracy and consistency. Each case can be personalized using the latest variable data printing technology to add serial numbers, barcodes, etc., ideal for tracking the iPad in a school setting.

The Tough Case is available from iGearUnlimited.com. Schools should contact the company directly for a educational discounts. iGear also makes a custom photo case for the iPad, popular with schools’ sports teams and other activity groups.

About iGearUnlimited.com
iGearUnlimited.com is powered by Sunrise Digital, an Inc. 5000 company established in 1988 and employs the most advanced equipment and technology, such as G7-certified HP Indigo and UV flatbed presses, and digital die-cutting, to create best-in-class products. A privately-owned enterprise, the company is based in Chicago and sells products worldwide.