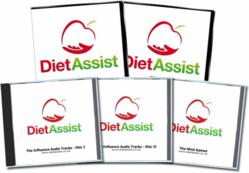 DietAssist now available as a 2 DVD, 3 CD set as well as online

While people can be motivated short term, it takes more than some cash in the pocket to make those changes stick. That's where DietAssist makes a difference.

In a study being presented today at the American College of Cardiology's 62nd Annual Scientific Session by the Mayo Clinic, it was found that obese employees were more likely to lose weight when offered cash incentives.

The study, on 100 Mayo employees, gave some obese workers the opportunity to win or lose cash based on how successful they were at losing weight. Those on the cash incentives scheme lost an average of nine pounds over a year. Those who weren't offered the cash lost about 2.3 pounds.

“Although the rewards offered are relatively small, the study shows they still seem to be a significant motivator,” says Rob Woodgate, co-creator of the DietAssist Programme. “In our recent article, ‘How many calories to lose weight?’, we showed how dropping just one chocolate bar from a person’s daily intake can make the difference between losing weight or not, so it may be that the reward is significant relative to the changes needed by the employees.”

“When we think about it in terms of being paid £13 to give up the equivalent of one chocolate bar per day, then it seems less surprising.”

The DietAssist programme uses psychological techniques to change the way people perceive food. Most importantly, the programme contains persuasion MP3’s which help to train the mind into a new pattern of behaviour around food.

This is something that the cash incentives did not manage to achieve. In the study, once the cash offer was removed, the motivation dropped off. “This is not surprising,” says Rob Woodgate, “The study shows that while people can be motivated short term, it takes more than some cash in the pocket to make those changes stick. That's where DietAssist makes a difference.”

The programme is designed to be used just a few minutes per day, which means it is easy to fit into even the busiest of schedules.

The DietAssist programme is the result of over 20 years experience of helping people to lose weight effectively, and uses the latest psychological techniques to avoid the self sabotage and demotivation that dieters commonly experience.

The DietAssist programme helps dieters strengthen their motivation and resolve, and creates the optimum psychological state for success. It is designed to work alongside any weight loss programme or sensible eating plan.