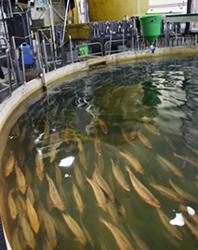 We are alarmed by the lack of attention paid to the environmental impacts of net-pen farming and finding solutions to those impacts
- Sue Scott, Atlantic Salmon Federation

Wild salmon advocates from Canada’s east and west coasts, including the Atlantic Salmon Federation, welcome the tabling of the long-awaited Fisheries and Oceans Standing Committee Report on Closed Containment technology. The report has the potential to help foster change in Canada’s salmon aquaculture industry and offer much-needed protection for Canada’s wild salmon, coastal fisheries and the communities that depend on healthy oceans.

While the Committee’s recommendations acknowledge that closed containment is a viable technology, offering opportunities for technological advancement in Canada and indicates that government should provide financial support to further refine and develop the technology, they also support the status quo vis-à-vis open net pen aquaculture as it is currently practiced.

“The real question is will government actually act on any of the Committee’s recommendations and how will they interpret them?” said John Werring, David Suzuki Foundation.

Member organizations of BC’s Coastal Alliance for Aquaculture Reform (CAAR) and the Atlantic Coalition for Aquaculture Reform (ACAR) have testified before the Committee throughout its hearings on aquaculture, offering evidence of the viability of closed containment technology, its economic feasibility, current use and success and the growing market demand for more responsibly reared farmed salmon.

The CAAR and ACAR groups agree with the Committee recommendation that a socio-economic study is required, however the groups maintain it must be comprehensive to have real value. A thorough analysis would include not only the potential effects of a transition to closed containment, but all environmental, social and economic impacts of open net-pen aquaculture and its effects on all economic sectors reliant on healthy ocean ecosystems.

“While the Committee’s report offers some positive recommendations for future funding of closed containment, we are alarmed by the lack of attention paid to the environmental impacts of net-pen farming and finding solutions to those impacts,” said Sue Scott, Atlantic Salmon Federation. “For example, the proposed Centre of Excellence for Salmon Aquaculture Development makes absolutely no reference to the environment, wild fisheries or ocean health”

The east and west coast groups met all last week with opposition and government MPs and senior Fisheries and Oceans Canada staff to push for implementation of the recommendations of the federal judicial Inquiry into the collapse of BC’s Fraser River sockeye. Justice Bruce Cohen’s 75 recommendations were tabled in the House in October, 2012, following 3 years of expert testimony, volumes of scientific evidence and a $26 million investment by the Canadian government. To date, the government has failed to respond to or act on a single one of Cohen’s proposals to sustain Canada’s wild salmon runs, even though Cohen concluded that wild sockeye face a ‘serious and irreversible’ risk of harm from net-pen salmon farming.

“Wild salmon are the lifeblood of ecosystems on Canada’s east and west coasts,” said David Lane, T. Buck Suzuki Environmental Foundation. “All Canadians currently bear the cost of the ongoing damage done by salmon farms to our oceans and our wild fisheries. What will it take for the current government to act in support of our oceans and the communities that depend on them?”

The Standing Committee Report can be found at:
http://www.parl.gc.ca/HousePublications/Publication.aspx?DocId=5994887&Language=E&Mode=1&Parl=41&Ses=1