Autistic Kicker Anthony Starego was a standout at the National Camp Series (NCS) Super Camp VII held in Orlando, FL, in February, and now seeks to add an additional year to his high school athletic eligibility according to NCS Associate Lee McDonald. 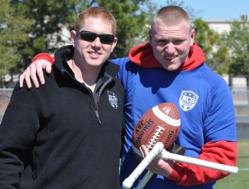 The repetitive, routine nature of being a kicker is a perfect match for the challenges Anthony faces being autistic. His football experiences have allowed his personality, confidence and self-awareness to prosper. Lee McDonald.

“It was a great pleasure to meet and watch Anthony Starego kick at Super Camp VII,” says Husted. “He was great person and everyone that had a chance to meet and "hang" with him enjoyed his company. His love for kicking and the energy and positivity that he brought to the camp was infectious. On top of everything, he is a very solid kicker.”

McDonald, who has been Starego’s kicking coach for the past few years, agrees with Husted that Starego was a ‘standout’ at Super Camp VII. McDonald says that just highlights why it is so important Starego be given an additional year of ‘athletic eligibility’ so he can continue to play football.

“Anthony is appealing to get another year of high school eligibility as he will need to be in school until age 21 because of his disability,” says McDonald. “I am urging the New Jersey State Interscholastic Athletic Association (NJSIAA) to strongly consider granting Anthony this additional year.”

Under the rules of the New Jersey State Interscholastic Athletic Association – the state's governing body for high school sports – Anthony's age, the length of time he's played high school athletics, as well as his ability to influence games means he may not be eligible to play another season.

“As his private kicking coach, I have seen Anthony make tremendous personal strides since I met him four years ago,” says McDonald. “The repetitive, routine nature of being a kicker is a perfect match for the challenges Anthony faces being autistic. His football experiences have allowed his personality, confidence and self-awareness to prosper.”

McDonald says he is writing to the NJSIAA as educators, “In hopes they will understand how important football is to Anthony’s social and emotional development.”

Anthony Starego’s story has already been featured in the national media including ESPN. Ray Starego says letting Anthony continue to play high school football for another year will allow his story to continue to inspire countless other individuals around the country who face challenges of their own.

“Getting another year of eligibility will allow his story to continue,” says Ray Starego. “This continuation is critical to bring this story from the sports world to main stream media. The value and benefit of this will help so many. Anthony's story has resonated with so many people on many different levels. Anyone who watches the five minute piece ESPN created, and broadcast, on Anthony’s story, is not only enlightened about the challenges those with autism face, but they are affected in a very positive way.”

Ray Starego says he hopes his son’s story will appeal to the ‘educator’ side of the decision makers.

“The NJSIAA appeals committee is made up of school principals, athletic directors, and school administrators and the like. They have chosen these professions because they believe they can make a difference. I want to impress on NJSIAA that they have a chance to make a decision that can help change the world.”

“It's really amazing,” Starego continues. “I believe Anthony can change his piece of the world. It's so exciting. A positive ruling from the NJSIAA would go a long to putting all this good stuff into motion.”

The appeals hearing for Anthony Starego’s additional year of athletic eligibility will be held on March 11, 2013.