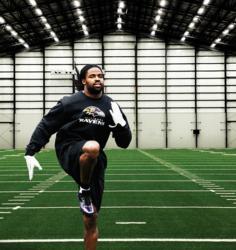 Being a world champion is amazing and being able to practice and play on the best synthetic turf system in the world is one of the things that helped get us there.

Baltimore Ravens wide receiver Torrey Smith has had a busy and productive couple of years.

Since coming into the league in 2011, Smith has played in 38 games and amassed 114 receptions for 1,929 yards. He is averaging 16.9 yards per catch and has 18 touchdowns. His performances were also good enough to help earn his team a world championship.

Now, Smith has signed on to speak for the company that provided the field where he plies his trade.

“The Baltimore Ravens and Shaw Sports Turf are two teams I’m proud to be a part of,” said Smith. “Being a world champion is amazing and being able to practice and play on the best synthetic turf system in the world is one of the things that helped get us there.”

Smith said that the performance of the field gives him the confidence to do what he is trained to do.

“I know that a firm and consistent surface are what I need to be fast and be open,” he said. “With Shaw Sports Turf I know I can run the routes, make the cuts and catch the passes to help keep the Ravens on top.”

The proof is as easy as looking at the Ravens’ home field record. The team has played on Shaw Sports Turf since 2003. In 2010, the team installed a new Shaw Sports Turf Momentum 51 system. Since then, their record in home games is 23-3, a winning percentage of .885.

“We are honored to have a player of Torrey Smith’s caliber endorse our product,” said Chuck McClurg, Vice President of Sales for Shaw Sports Turf. “Skill position players, more than any other, know how important the playing surface is. Having Torrey’s take on how it affects his play is a great sales tool for our organization. The best part about our relationship with Torrey is that he’s not only an outstanding athlete, he’s an even better person.”