Around 250 Expressions to Exhibit at 14th Annual Show. 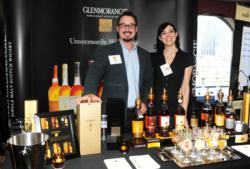 Whiskies and their knowledgeable ambassadors

"I'm elated to see the increase in brand participation, as well as the depth and education of the whisky consumer", said Douglas Smith, the Event Director.

The Whiskies of the World Expo today released the exciting line up of brands participating at this year’s event, which will be held on Saturday, April 6, 2013, on The San Francisco Belle, Hornblower Yacht (docked).

Now in its 14th year, the Whiskies of the World Expo gathers the world’s most fascinating distilled spirits along with their makers and ambassadors to give its guests an opportunity to sample, learn and experience the art of whisky. A San Francisco favorite, the Expo is adding new and exciting details to the evening to make sure that this is the event of the year.

From the biggest brand names to small hard to find boutique whiskies, there will be a spirit to suit everyone’s taste. In addition to incredible spirits from every corner of the world: as close as California to as far as France, India, Australia and Taiwan, the Expo will also feature seminars conducted by world famous Master Distillers and Brand Ambassadors. Many of the seminars are specially created for this year’s event:

Guests will also enjoy a full buffet dinner, mixology demonstrations, Celtic crafts, whisky pairing with artisanal foods such as premium chocolate, organic jerky, sustainable seafood, handcrafted cheese, and chutney, a live Pipe and Drum Concert and more, including some surprises. In addition, the Expo will allocate the top deck for Cigar and Whisk(e)y pairing-a standing out component of the event.

More about Whiskies of the World LLC

Whiskies of the World is based in California and owned by International Wine & Spirits Competition and Douglas Smith. The first annual Whiskies of the World Expo was held in San Francisco in 1998, and has enjoyed a considerable growth since then. “For the four years I’ve been running the event, I am elated to see not only the increase in brand participation: about 250 expressions will be presented this year, but also in the variety of whiskies as well as depth and education of the consumer,” said Douglas Smith, the Event Director.