2012 a record year for company formation in Rochdale, reports Duport

The latest Duport Business Confidence Reports shows 2012 was a record year for company formation in Rochdale. 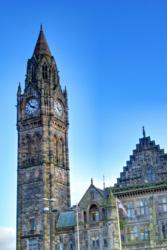 The rise in company formation suggests that business start-ups see the area as a good place to set up, which is another positive sign for the local economy

Over the course of the year, there were 663 new companies formed - more than any other year in the history of the town. 2012 is the second year running in which company formations have risen in the area.

Net company growth also rose last year, with the company register increasing by 259, compared to 240 in 2011, and 82 in 2010. This rise could be due to ongoing regeneration of the town centre attracting new businesses. Recently completed projects include a new tram link to Manchester city centre and Number One Riverside, which will contain a new library, customer information point and council offices, as well as retail and leisure facilities.

“With all the regeneration projects going on, Rochdale looks set for an exciting period of change. The rise in company formation suggests that business start-ups see the area as a good place to set up, which is another positive sign for the local economy.”

The Duport Business Confidence Report for Rochdale uses economic data to give a snapshot of the local business landscape. More information and statistics can be found at http://www.duport.co.uk/rochdale.