The Speed Channel is scheduled to feature accessories from Everything Chrome Parts on an upcoming episode of one of their most popular shows, Two Guys Garage. Kevin Byrd and Willie B will explain how to remove a dent in an F-150 cowl hood. 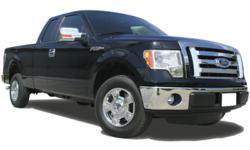 We carry one of the largest inventories of aftermarket accessories for the Ford F-150...

The Speed Channel, the network that prides itself on being “The Motor Sports Authority,” will feature a cowl hood and other auto accessories supplied by Everything Chrome Parts on one of their upcoming episodes of Two Guys Garage. Two Guys Garage is a popular television show that has been airing on Speed since 2001. The show chronicles the adventures of hosts, Willie B and Kevin Byrd as they repair, customize and restore automobiles. On an upcoming installment, Two Guys Garage partners with Everything Chrome Parts to demonstrate how to remove dents on a Ford F-150 cowl hood.

Two Guys Garage, with its quick-witted hosts and a great appreciation for all things automobile, has gained a reputation over the years for being a trusted, reliable and entertaining source of automotive knowledge.

In this episode, Everything Chrome Parts supplies the EFXFRD09V1 cowl hood for the 2009 - 2013 Ford F-150 trucks, which Willie and Kevin will proceed to dent. They will then walk the audience through a step-by-step process of how to remove the dent and restore the hood to its factory-new condition. “We carry one of the largest inventories of aftermarket accessories for the Ford F-150, and it is an honor to be a part of this episode” said, Chris Doyle of Everything Chrome Parts.

The episode, which is scheduled to air Sunday, March 17 at 9a.m. EST on Speed, is meant to show the audience how to restore sheet metal, as well as give them some tips on accessorizing their vehicles. It will also replay March 20 at 4:30 p.m. EST, as well as various other times throughout the year.

For more information about Two Guys Garage, visit their website at http://www.twoguysgarage.com

To learn more about Everything Chrome Parts, visit their website at http://www.everythingchromeparts.com