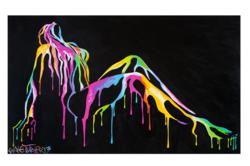 GraffitiPrints.com have now teamed up with Shane Turner on his acclaimed Psychameleon piece, to be layered up and released as a signed limited edition print on March 15th 2013.

Rising street art star Shane Turner from Canada has selected GraffitiPrints.com, the UKs freshest new urban art gallery, to be his first European partner in print. After a sell-out print run from Norway’s Martin Whatson, GraffitiPrints.com have now teamed up with Shane Turner on his acclaimed Psychameleon piece, to be layered up and released as a signed limited edition print on March 15th 2013.

After the successful release of Martin Whatson’s “Make Love”, which took the market by surprise, Shane was shown the high quality layering techniques used to produce the prints. This gave him the confidence needed to bring a complex piece such as Chameleon to the market, with multiple layers and processes being used to bring the print to life.

Here are some of the initial comments as the details of the print, and the first images, were posted onto the Banksy Forum.

“This print really excites me. I want it on my wall.”

“Makes a change to see something a bit more original, nice!”

“Looks great. Vibrant stand out colours would brighten any wall.”

Graffiti Prints is excited about this release and is certain it will put Shane Turner firmly on the map in European street art circles. With a packed upcoming schedule of print releases planned every month through to summer, GraffitiPrints.com is certainly the gallery to watch in 2013.

GraffitiPrints.com is an exciting new street art gallery producing limited edition artist prints from some of the world’s freshest new talent. Based in the North of England in a unique loft style gallery space, the company sends art across the globe.