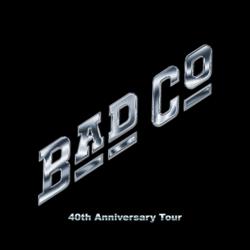 Bad Company has announced the complete itinerary for the band's Summer tour of the U.S. Celebrating their 40th anniversary since forming, the excursion begins on June 15 in Rancho Mirage, CA and will stage 22 dates, ending on August 3 in Orilla, Ontario, including 13 Co-Headline dates with Lynyrd Skynyrd. DiscLive Network, the global leader in the field of “instant” live content, will be recording and releasing commemorative 40th Anniversary CD sets for the band at each stop along the way.*

Bad Company were dubbed a super-group upon the band's formation due to the union of Free's Paul Rodgers (Vocals / Multi-Instrumentalist) with Mott The Hoople's Mick Ralphs (Guitar) plus Free's Simon Kirke (Drums) and King Crimson's Boz Burrell (Bass), who passed away in 2006. Over the next nine years, the band released a string of six albums that sold tens of millions of copies, yielding international hits "Can't Get Enough," "Bad Company," "Feel Like Makin' Love," and many others penned by the main songwriters Paul Rodgers and Mick Ralphs. Original members Rodgers, Ralphs, and Kirke will be joined by guitarist Howard Leese and bassist Todd Ronning (from Paul Rodgers solo band).

Bad Company has inspired many of today's musicians, most notably, metal band Five Finger Death Punch who scored a #1 Active Rock hit with a cover of the song "Bad Company". Since 2001, the band has had only a few isolated performances, and has not staged a tour of the United States and Canada until now.

In front of the run, Rodgers shares, "When Mick and I formed the band in the 70's we were amazed at the instant success. It didn't hurt to have Led Zeppelin behind us, and we wrote some decent songs that still resonate. This one is for fans."

“This is a huge milestone for Bad Company,” said Bair, “and we are so excited to be part of it. We’ve previously worked with Paul and the guys, and they sound amazing and are a lot of fun to work with. Their fans were simply spectacular and we are very excited to be offering this exceptional collectible product to them.”

The fully mixed and mastered CD sets will be packaged in high-gloss DigiPaks, commemorating the band’s incredible 40 year journey with a silver stamped Bad Company logo on the front. Each package will contain a double CD set of the night’s performance, along with a bonus “Rockumentary” CD featuring an exclusive new interview from syndicated radio personality Redbeard, of InTheStudio. Each copy will be individually numbered and only a few hundred will be made for each show. Once they are gone, they will be gone forever!

The initial tour dates that will feature a DiscLive Network recording are below. Fans can pre-order a copy of these very special keepsakes at http://www.disclivenetwork.com and choose to pick it up at the venue or have it shipped to them. They can also purchase a copy on-site while supplies last.

About DiscLive Network
DiscLive Network™, a RockHouse Live Media Productions, Inc. brand formerly known as Abbey Road Live US, is the global leader in the market of live discs and media offered to fans immediately after a concert, with almost a decade of experience in the space. The company, led by original DiscLive CEO Zach Bair, has developed and refined technology and processes that enable the mass distribution of CDs, DVDs, USBs, mobile, and other forms of digital media within minutes of the end of a concert or event. In the last several years, the DiscLive Network team has solidified the company’s quality and leadership by recording hundreds of shows and releasing tens of thousands of experiential products for such artists as Slash, Peter Frampton, REO Speedwagon, The Pixies, Devo, Blondie, and many more. The company’s hard-copy product offerings, including CDs, are often individually numbered, making each unit an immediate collectible. Products are packaged in superior designs such as DigiPak covers, which are pre-printed with custom designs authorized or designed by the artist/label. For more information, visit http://www.disclivenetwork.com.