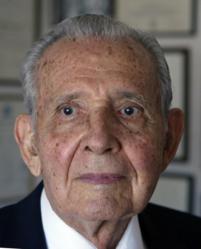 Ambassador Telles was an officer, statesmen, and diplomat who was treasured by all who met him. The forces of good have lost one of its greatest champions. We will miss him so very, very much.

The National Alliance for Hispanic Health (the Alliance) joins the nation in mourning the loss and celebrating the life of Ambassador Raymond L. Telles, one of the country's most distinguished voices of opportunity for all. Ambassador Telles passed away Friday, March 8, 2013. He was 97 years old. Our prayers are with his family and those throughout the Americas whose lives he touched.

"Ambassador Telles was an officer, statesmen, and diplomat who was treasured by all who met him. The forces of good have lost one of its greatest champions. We will miss him so very, very much," said Dr. Jane L. Delgado, President and CEO of the Alliance.

Ambassador Telles changed the landscape of Hispanic participation in American civic life. Born in El Paso, Texas on September 5, 1915 he served his country in the Army and the Air Force. Returning to his beloved hometown, he served four terms as county clerk of El Paso and established a reputation for hard work, integrity, and commitment to his community.

In 1957, he was elected Mayor of El Paso following a campaign that drew from all segments of the city and leading a Hispanic voter registration drive that remains a model today. His election marked the first time an Hispanic had been elected Mayor of a major U.S. city.

Following his second mayoral term, President John F. Kennedy appointed Telles Ambassador to Costa Rica. He was the first Hispanic to be named a U.S. Ambassador. It was particularly meaningful that the appointment was made to a country of the Americas.

"By his example of professional and personal integrity and mentorship of generations of civic leaders, Ambassador Telles has enriched us all with a model of the highest standard of American leadership," said Dr. Delgado.