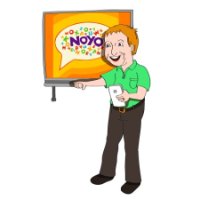 “Noyo’s unique vocabulary-building system was created to give novice students a jumpstart on learning a new language and really brings the classroom to life when used on an interactive whiteboard,” said Co-Creator Mike Sullivan

Noyo, an education software company based in Boston, MA, is excited to announce the availability of its MacOS Spanish Vocab app, designed to systematically boost the vocabulary of beginning Spanish students.

The popular iPad app by Noyo has received over 30 five-star reviews in the iTunes store. Noyo revamped the app to be included in the iTunes MacOS store after requests from Spanish teachers looking to use Noyo's apps on the interactive Smart Boards and Eno boards in the classroom.

“Noyo’s unique vocabulary-building system was created to give novice students a jumpstart on learning a new language and really brings the classroom to life when used on an interactive whiteboard,” said Co-Creator Mike Sullivan, who serves as Chief Learning Officer.

When the Noyo Spanish app is projected from the MacBook Pro to a white interactive Smart Board, the classroom comes alive as students go on a virtual journey through a colorful landscape of exciting scenes. The curriculum introduces words and phrases in context to help beginning learners strengthen their Spanish vocabulary.

Features of the Noyo Spanish app for Apple iPad and MacOS include:

-Over 1800 vocabulary words, each reinforced by supporting audio, visual representation, and written translation

-Built-in assessment questions at the end of each unit

-Content designed for teacher classroom use, parents to use with young children, and self-study for teens/adults

Noyo was created through the combined vision of popular Spanish teacher Mike Sullivan and innovative mobile software entrepreneur Ted Chan, who specializes in mobile user interface design.
Noyo Spanish is now available on iTunes at an introductory price of $3.99 Learning on the iPad, and the MacOS store.

Noyo is headquartered in Boston, MA. It is dedicated to providing engaging, cost-effective, high-value supplemental learning tools for tablets to language learners of all ages. More information can be found at http://www.noyo.com.