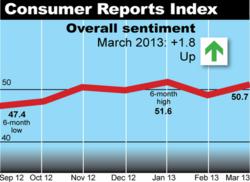 The long view shows the financial hardship faced by Americans has declined sharply from the dire days of two years ago. But, that has yet to translate into robust levels of retail spending for 2013.

The Consumer Reports Index, an overall measure of Americans’ personal financial health, showed improvement in consumer confidence indicators over the past 30 days.

The Consumer Reports Index’s sentiment measure improved for March, climbing back to positive territory at 50.7 from 48.9 the prior month. The greatest improvement among income brackets was from lower-income households earning less than $50,000 (climbing 3.7 points).

The Consumer Reports Index’s trouble tracker measure, which gauges the scale and frequency of financial woes that Americans face, also improved for the fourth straight month. The Tracker stands at 38.8—near its all-time low of 38.7 set in November 2012. The greatest improvement was among middle-income households earning between $50,000 and $99,000, where the Trouble Tracker measure declined 14.6 points. The two most prominent troubles Americans have faced over the past 30 days were missed payments on a major bill (other than mortgage), and being unable to afford medical bill or medications.

“The long view shows the financial hardship faced by Americans has declined sharply from the dire days of two years ago. But, that has yet to translate into robust levels of retail spending for 2013,” said Ed Farrell, director of consumer insight at the Consumer Reports National Research Center.

The Consumer Reports Index’s Past 30-day retail measure continues to lag. It is now at 9.9, below both last month (10.5) and one year ago (11.5). The drivers of this decline were softness in both major home and personal electronics as well as small appliances. Planned consumer retail activity for March, as predicted in the Index’s next 30-day retail measure, shows year-over-year losses in the same categories.

The Consumer Reports Index employment measure crept us slightly for the second straight month to 49.9 from 49.4 a month earlier. Consumers reported that jobs gains (4.2%) kept pace with job losses (4.3%) in the past 30 days.

The Consumer Reports Index, conducted by the Consumer Reports National Research Center, is a monthly telephone and cell phone poll of a nationally representative probability sample of American adults. A total of 1,005 interviews were completed (655 telephone and 350 cell phone) among adults aged 18+. Interviewing took place between February 28 and March 3. The margin of error is +/- 3.2 percentage points at a 95% confidence level. The complete index report, methodology and tabular information are available. Contact: C. Matt Fields, 914-378-2454, CFields(at)consumer(dot)org.

MARCH 2013
© 2013 Consumer Reports. The material above is intended for legitimate news entities only; it may not be used for advertising or promotional purposes. Consumer Reports® is an expert, independent nonprofit organization whose mission is to work for a fair, just, and safe marketplace for all consumers and to empower consumers to protect themselves. We accept no advertising and pay for all the products we test. We are not beholden to any commercial interest. Our income is derived from the sale of Consumer Reports®, ConsumerReports.org® and our other publications and information products, services, fees, and noncommercial contributions and grants. Our Ratings and reports are intended solely for the use of our readers. Neither the Ratings nor the reports may be used in advertising or for any other commercial purpose without our permission. Consumer Reports will take all steps open to it to prevent commercial use of its materials, its name, or the name of Consumer Reports®.