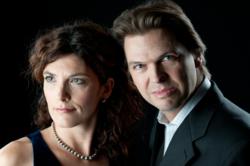 The Dranoff International 2 Piano Foundation has announced that Piano Slam 5 will take place on Thursday, May 2, at 7:30 p.m., at the Adrienne Arsht Center for the Performing Arts, located at 1300 Biscayne Boulevard, Miami, FL 33132 U.S.A. Piano Slam is an annual performance and education experience and competition that combines the Dranoff 2 Piano Foundation’s award-winning pianists, renowned poets, and spoken word artists in collaboration with middle and high school students throughout Miami-Dade Country.

The program presents live Dranoff classical duo piano artists in performance at multiple Miami-Dade Public Schools after which students are invited to write poetry about music and then create a spoken word experience for a county-wide competition. Dranoff pianists, professional rappers, and other artists present Student poetry winners in a Classical/Hip Hop/Spoken Word extravaganza concert in the John S. and James L. Knight Concert Hall at the Arsht. Student winners receive cash prizes and are eligible to win laptop computers. There is no fee to participate. PIANO SLAM is Free for Everyone. Tickets are Required - Free tickets must be ordered through the Adrienne Arsht Center at http://www.arshtcenter.org.

Tickets to Piano Slam 5 are free-of-charge and may be ordered through the Arsht Center’s online ticket sales portal at http://www.arshtcenter.org.

For 25 years, the Dranoff International 2 Piano Foundation has been the world’s leading champion of two-piano repertoire and artistry. Located in Florida’s Greater Miami-Dade County, it is one of the area’s few performing arts organizations whose activities span the globe and create recognition abroad for the city of Miami.

Formerly known as the Murray Dranoff Foundation, the Dranoff International 2 Piano Foundation was established in 1987 by the late pianist and educator Loretta Dranoff, in memory of her husband and performance partner. Loretta and Murray were a highly sought after piano team from 1946 to 1973, performing as Steinway and Columbia artists. In forming the Foundation, Loretta sought to invigorate international interest in 2 piano repertoire and artists, assist with young artist career development, and contribute to the community through innovative outreach programs.

Since its inception, the Foundation’s principle agenda has been to sponsor a 2 piano international competition for young, professional musicians. Competitions currently take place every four years. First ($25,000), Second ($15,000), and Third ($10,000) Prizes are awarded as well as two $5,000 prizes that recognize the finest performance of a particular piece. Winners also receive assistance with securing concert engagements. The past 11 competitions have produced over 30 winning duos, hailing from more than 30 countries. In 1999, the Dranoff became the only international competition exclusively dedicated to 2 piano artistry and repertoire to be accredited by the World Federation of International Competitions.

In conjunction with the competition, the Foundation also endeavors to take significant steps toward sustaining and expanding the quality of 2 piano repertoire. For each competition cycle, an internationally recognized composer is commissioned for a new work required in the semi-final round. The award-winning composers commissioned thus far include Sir Richard Rodney Bennett, Marcel Bergman, William Bolcom, John Corigliano, Morton Gould, Fred Kaufmann, Michel Legrand Lowell Liebermann, Robert Xavier Rodrigues, Ned Rorem, and Paul Schoenfield. Through these commissioned works, the Dranoff makes two highly significant contributions to the world of music. First, the Dranoff actively adds to the growth of the 2 piano repertoire at the highest level and second, it ensures that the music is heard by facilitating their post-competition performance as ten piano teams have the works in their active repertoire. The commissions have been made possible through the generosity of Alvin Perlman and his family as well as other funders.

In 2004, the Foundation increased its activities beyond the competition. Noting the need for substantially greater emphasis in arts learning and activities in the Miami-Dade public schools, the Foundation developed free community and in-school programs. While they were well received by the community, the Dranoff leadership did not feel they accomplished enough.

In 2009, Piano Slam, was organized and presented as a multi-media poetry contest for middle and high school students. It was clear that Piano Slam was a better fit for the Dranoff mission. Piano Slam not only emphasizes the beauty of the 2 piano art form, but it also motivates Miami-Dade’s students to experience for themselves the excitement of creating art through poetry and having the chance to perform it with professionals on the area's premiere concert stage, the Adrienne Arsht Center for the Performing Arts. Now in its fifth year, students are vying to be among the fifteen winners who will receive $100 in prize money with one middle school student and one high school winning an additional $500 and a laptop computer for their performances as Best-in-County.

The gala multi-media concert has included high-profile community members, such as the basketball’s Miami Heat, as well as Dranoff Competition winners. Over 1,500 student entries have been received each year from more than 62 schools. The Foundation has also presented public concerts for the past eight years to expose south Florida audiences to the Dranoff and its laureates, and to gain wider support for two- piano repertoire.

The Foundation is currently preparing for the 2013 Competition as is composer Gabriela Lena Frank, who has been commissioned to write the new piece for the semi-final round. More than 50 teams worldwide are expected to compete in the December 2012 preliminary rounds, which take place in Hannover, Germany; Beijing, China; and Chicago, Illinois, USA.