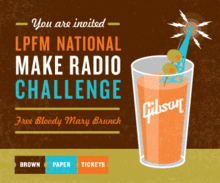 Brown Paper Tickets, the Not-Just-For-Profit event registration and ticketing company, is launching a National Make Radio Challenge during South-by-Southwest (SXSW) to bring awareness and guidance to nonprofits eligible to apply for a low-power FM (LPFM) radio license, in preparation for a once-in-a-lifetime application window being offered by the Federal Communications Commission (FCC) this fall.

“Now is the time for nonprofits to prepare their application to own a part of the public airwaves,” said Sabrina Roach, a Doer specializing in public interest media for Brown Paper Tickets. “Most traditional media have not included the LPFM application window in news coverage, and the majority of groups eligible to apply are not aware that this opportunity exists. This is a problem, because the application will take about three months to complete.

“The National Make Radio Challenge is needed to make groups aware of the opportunity, to inspire them to think about how they could use the power of radio to serve their communities, to guide them to resources that make building and operating a radio station realistic, and to help them to organize and successfully complete the application in time,” Roach said.

This will be the first time that LPFM licenses will be awarded in large urban markets, and likely the last time that they will be awarded at all, making the Oct. 15 application window an important opportunity for nonprofit community groups to reach larger audiences. Some potential uses for LPFM would be for recruiting volunteer and financial support, organizing, telling stories that don’t make it to commercial media, publicizing meetings and events, serving as resource for youth education, hyper-local community news, exposure for local artists and musicians, and much more.

“Our hope is that community groups take up the challenge and use the public airwaves for public good,” Roach said. “An additional benefit would be in helping to correct the lack of diversity in media ownership, in that 87 percent of all radio stations are owned by Caucasians, 6 percent are owned by women and 7 percent by people of color, which influences the programming heard on the public airwaves.”

Seattle and Austin LPFM Toolkits have been published at http://community.brownpapertickets.com/Doers/index.html. “We have been able to identify more than $6 million in public funding that is appropriate for nonprofits applying for LPFM to compete for in both cities,” Roach said. “We can guide nonprofits on how to find public funding to help them to make radio in many communities.” A national LPFM Toolkit with step-by-step instructions on how anyone can successfully apply for and fund their goal of building and operating a LPFM station will be published online during the Journalism That Matters conference in Denver, Colo., on April 3.

The National Make Radio Challenge event will be from 11a.m. to 2 p.m. at the Gibson Guitar Showroom, 3601 S. Congress, and is open to the public with an RSVP at http://www.brownpapertickets.com/event/347626. The event will feature a panel of local and national media policy advocates and music industry professionals from the Future of Music Coalition, the Austin Creative Alliance, and more.

Hollis Wong-Wear, a singer in The Flavr Blue, writer and creative producer who currently performs with Macklemore and Ryan Lewis and produced the video for their #1 Billboard hit, "Thrift Shop," will appear on the National Make Radio Challenge panel. She will be also be posting a series of candid photos and videos of musicians between sets at SXSW sharing their opinions about what LPFM means to those who make music. These photos and videos will be featured on Twitter, (@BPTMakeRadio), Instagram (lpfmmakeradiochallenge), and Facebook (https://www.facebook.com/pages/Make-Radio/564024070285609?fref=ts).

Brown Paper Tickets supports the proliferation of LPFM because of its Not-Just-For-Profit business model, which translates “paying it forward” into sustainable commerce while building a better world. “Brown Paper Tickets commits 5 percent of all profits to building healthy communities, and we believe that LPFM is an important and powerful tool in that mission,” said Roach.

About Brown Paper Tickets: Brown Paper Tickets (http://www.BrownPaperTickets.com), the Not-Just-For-Profit ticketing company, revolutionized the industry by putting free, professional tools for ticketing any-sized gathering on the Internet, and continues to champion the rights of ticket-buyers with the lowest fee for the most service in the industry. The company donates 5 percent of the profit from each ticket sale to build communities and nonprofits, pays its employees to work 40 hours each year for the cause of their choosing, and employs a team of “Doers,” experts in industries such as music, new media, makers, roller derby and more, to fix, improve and revolutionize the communities where we live, work and play.