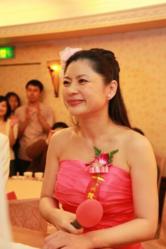 Hellen Chen at a wedding ceremony she presided

... the truth is, getting married will help a couple to be more focused in their goals and careers and thus it will increase their ability to earn better wages.

According to the latest population report by the US Census Bureau, married men between age 18-64 are higher paid in salary ($55,958 median income) than single men ($34,634). This report also showed married women earning more wages than single women.

The popular Beatles song goes "Money can't buy me love", however, can love be an important factor to increase one's income?

"There is this misconception that one needs to have money before getting married. But the truth is, getting married will help a couple to be more focused in their goals and careers and thus it will increase their ability to earn better wages," said Los Angeles marital expert and bestselling author Hellen Chen, at a marriage workshop held for singles and couples.

Chen is well-qualified as an expert to discuss this phenomenon as she personally helped over 100 singles to get married and she had followed up with their lives after marriage.

She witnessed how the couples' lives transformed over a period of time and, despite concerns about financial burdens, couples excel even better in their careers than they did before, even with the arrival of children.

"Marriage can give you the vital training to become a better worker, a better manager and a better CEO," said Chen. "You cannot get this type of learning no matter how much you aspire to be a good executive and thus spend all your time attending leadership courses, reading books, etc. If that marriage wheel is missing, you will not have that break-through you are looking for."

In a recent interview with EFE, the largest Spanish news wire, Chen spoke about how society promotes academic and financial achievements and single people waited until too long to settle down.

"We can never be 17 twice," said Chen. "Once you become 40-year-old and wish to find a spouse, do not think you could then run a perfect marriage. Whatever you did not go through when you were younger, you would have to learn from scratch at age 40! Now that's tough!"

Chen also mentioned, "There is a Chinese saying: 'they are so poor that they only have money." That means, a person only knows how to make money but he knows no happiness, no future and only has possession of material comfort and nothing else."

Chen's maverick matchmaking theories caught the eye of an award-winning documentary director who then followed Chen around with a camera, making her stories into a real-life feature documentary -- the first ever -- on the subject of love. The film "Let's Fall in Love" became a large audience's favorite in major film festivals around the world.

Chen wrote about the real-life stories of the couples she match-made in her book, "The Matchmaker of the Century."

This book was launched on Barnes and Noble last year and while debunking many marriage myths such as "there are no more freedoms after marriage," it struck a chord with readers and achieved #1 bestselling status in 6 categories: marriage, self-help, relationships, love and romance, self-improvement and parenting and family.

For years as a business management consultant, Chen had addressed leaders and executives of government agencies, corporations and colleges around the world to give solutions on boosting productivity and improving leadership qualities.

“In every lecture that I give, the answers to better work results always end up with the areas of ‘are you being a good spouse or parent in the first place?’ or ‘how do you treat your loved ones at home?’” said Chen.

Chen has begun a series of marriage workshop s in Taiwan and in America to help working professionals who are single or divorced to enrich their personal lives and thus overall financial growth and career. More information can be found on http://Matchmakerofthecentury.com