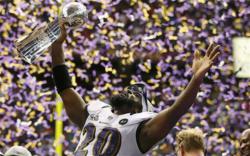 It was a great year for the Baltimore Ravens, as they first conquered the AFC North with a 10-6 record, then went on to defeat San Francisco 34-31 to win the Super Bowl XLVII. The Ravens also won the Super Bowl in 2000, making them the only team to have a perfect Super Bowl record. The season coming up is going to be an exciting one for Baltimore fans, while the Ravens look to defend that Super Bowl crown.

Unlike the fans out on the West coast, the fans on the East were quite ecstatic that evening. Hundreds of fans packed Federal Hill and the rest of the city to watch the Ravens’ second Super Bowl appearance. The citizens of Baltimore went all out for the game. Everyone was dressed in purple, and women even painted their nails to match their favorite team. Some fans even said that they were taking off work that Monday to celebrate, and their boss’s were too. Now that the season is over and trading has begun, the fans wait anxiously to see which players, new and old, will step out onto the field for their 2013 debut. Definitely returning will be quarterback and Super Bowl MVP Joe Flacco, a decision Ravens fans could not be happier about. Want to see if this team can make history? If so, go to RavensTickets.com to purchase your Ravens tickets and experience all the fun and excitement of the 2013 season!

The highly-regarded entertainment ticket marketplace, Inside Track Tickets, has launched RavensTickets.com, its newest ticket retail site featuring one of the largest suppliers of tickets for the Baltimore Ravens in Baltimore, Maryland. Not only can fans purchase Ravens Tickets, but they can also share their experience with friends and fans by participating in an interactive fan hub and social media experience showcasing an active blog at http://www.RavensTickets.com, which features team news, player updates, as well as videos, pictures, and other information. RavensTickets.com helps fans find everything they are looking for, from Ravens Tickets to news and events.