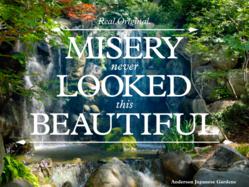 "The things that make Rockford such an attractive place for tournament organizers, meeting planners and leisure travelers are the same things that enhance the life we Rockfordians all enjoy," said John Groh.

If misery loves company, then Rockford, IL is in for scores of visitors. The Rockford Area Convention & Visitors Bureau (RACVB) has launched a spirited, tongue-in-cheek campaign in response to an annual Forbes Magazine report that ranked Rockford as the third most "Miserable City" in the United States in 2013.

The campaign, called Misery Loves Company, seizes the opportunity presented by this topical issue and turns it on its head to bring positive attention to the community's most "miserable" quality of life and tourism assets.

RACVB Chief Executive Officer John Groh said, "I think you'll see that Misery Loves Company will prove that if Rockford is miserable, there are probably many, many other communities around the country that could only wish they are as miserable as us."

"The things that make Rockford such an attractive place for tournament organizers, meeting planners and leisure travelers are the same things that enhance the life we Rockfordians all enjoy," said John Groh. "When the Forbes ranking was released, you could hear a collective groan all over the city."

Rockford residents, never content to sit idly by and take a figurative punch without throwing one back, have been engaged in a lively community discussion about the Misery ranking. Many pointed comments have been made about Forbes and the so-called "accuracy" of its methods. Chicago and other cities known for their tourism attractions appear with Rockford on the magazine's list.

On the heals of the topical and award-winning Hideaway in Rockford campaign – which dealt with the Wisconsin State legislators' escape to Rockford during their battle with Governor Scott Walker – RACVB has developed Misery Loves Company to showcase the tourism attractions that enhance Rockford's quality of life and contribute to its economic well-being and livability, and coalesce Rockford's community pride.

Community assets like Anderson Japanese Gardens, Sportscore One and Two, Magic Waters, Coronado Theatre, the Rockford IceHogs, the Discovery Center Museum and Aldeen Golf Club, just to name a few, have strengthened the region and attracted scores of visitors. These hotspots and more are highlighted in a video that showcase the “miserable” assets of the Rockford Region. Click here to view video .

In the days following it’s local introduction the campaign has generated active social media conversation and will continue to encourage broad community involvement from Rockford citizens via viral videos, collectible t-shirts, social media engagement and a number of live events and co-promotions.

The Rockford Area Convention & Visitors Bureau is a private, non-profit organization that champions efforts to promote and further develop the Rockford Region as an overnight visitor destination. RACVB generates positive economic impact for the community through investments in tourism marketing, sales, promotion and advocacy. gorockford.com